The Market Bubble Enters Its Blow Off Top

The markets roared higher over the weekend when Larry Summers withdrew his candidacy for Fed Chairman. This makes Janet Yellen of the San Francisco Fed the current favorite for next Fed Chair.

Truth of the matter is that neither candidate should be considered for Fed Chairman.

Summers was one of the chief architects for the 2008 meltdown, repeatedly pushing back on anyone who wanted to regulate the derivatives markets. This in of itself should bar him from ever being considered for a position of influence in the financial markets.

Yellen on the other hand is yet another academic with no business or banking experience. She was one of the primary forces behind QE at the Fed and has repeatedly advocated for more QE despite the fact that there is no evidence it has succeeded now (nor is there any evidence that it succeeded in the past).

Thus, we literally had a choice between one candidate who helped blow up the entire financial system and another candidate who has no idea of how the economy works outside of textbooks.

Regardless, the markets perceived Summers as hawkish and so they are ripping higher today believing that the next Fed chair will continue to maintain Bernanke’s policy of leaving a paper weight on the “print” button.

The markets are going positively manic on the news. 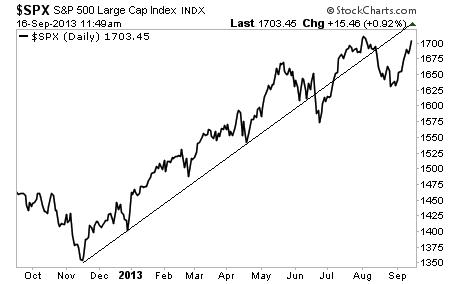 This feels like the final push before a more serious correction. The Fed meets on Wednesday at which point it is expected we’ll see a QE taper announcement.

The fact of the matter however is that Bernanke has created a bubble that is even bigger than that of 2007.

With that in mind, I’ve already urged my Private Wealth Advisoryclients to start prepping. We’ve opened six targeted trades to profit from the stock bubble bursting.

We’ve also taken care to prepare our finances and our loved ones for what’s coming, by following simple
easy to follow steps concerning our savings, portfolios, and personal security via my Protect Your Family, Protect Your Savings & Protect Your Portfolio reports.

I’ve helped thousands of investors manage their risk and profit from market collapses. During the EU
Crisis we locked in 72 straight winning trades and not one loser, including gains of 18%, 28% and more.

In fact, we’re currently on another winning streak having locked in FOURTEEN winning trades in the last two months, including gains of 10%, 11%, 21% and 25%.

All for the the small price of $299: the annual cost of a Private Wealth Advisory subscription.

To take action to prepare for what’s coming… and  start taking steps to insure that when this bubble bursts you don’t lose your shirt.