Stocks Just Took Out THE Line

The markets are finally beginning to realize that the debt ceiling debacle, economic contraction in the US, housing bubble 2.0 bursting, China slowdown, Japan stagflation and European banking crisis are not good for stocks.

With that in mind, the S&P 500 has briefly taken out the trendline that has supported it since QE 4 was announced. 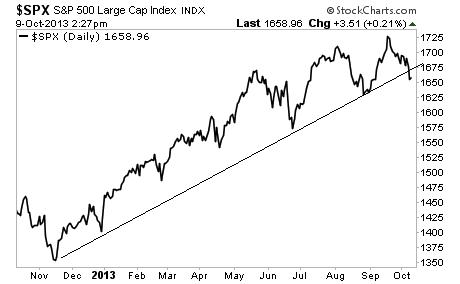 Remember, the Fed is printing $2 billion per day and funneling it into the system. So if the markets begin to break down NOW, the only thing the Fed can do is print more money.

However, this combined with the debt ceiling debacle could make a REAL mess. Yesterday the US issued a 4-week Treasury bill that came darn close to outright failure. With investors beginning to question whether the US might indeed have a debt crisis on its hands, investors are beginning to shun some US Treasuries and T-Bills for others based on priority of payments.

Remember, every single Treasury and T-bill out there is utilized as collateral for millions of Dollars worth of trades. So if the big financial institutions begin to refuse to accept some US debt as collateral based on the perceived risk of a deb ceiling debacle there could quickly be capital call in the market similar to what happened when Lehman failed.

This is not to say that the US will default on its debt. Rather this is to say that the mess the Government created is affecting things behind the scenes in the financial system. And this is where the next crisis could emerge.

With that in mind, investors should be prepping now for a potential run of systemic risk. If you are not already receiving powerful investment insights and recommendations on how to navigate this mess, I strongly suggest you take our a trial subscription to Private Wealth Advisory our monthly investment advisory devoted to helping individual investors hedge risk and protect their portfolios.

Few newsletters do a better job of navigating crisis than Private Wealth Advisory. During the EU Crisis of 2011-2012, we locked in 74 STRAIGHT winning positions and not one single loser.

We just started another winning streak in May.

Since then, Private Wealth Advisory subscribers have locked in 14 straight winners trades with gains between 7% and 25%. During this period we haven’t closed a single loser.

I just outlined six new positions that will produce huge gains when the market collapses from the Debt Ceiling Crisis.

To find out what they are, all you need to do is take out a trial subscription to Private Wealth Advisory.

For that price you get:

To take out an annual subscription to Private Wealth Advisory…