Europe’s Lies Are So Bad, They Make the US Look Good Comparison

While the US continues to bumble its way towards a debt ceiling crisis (somehow our President doesn’t have time to meet work on solving this, but does have time to make sandwiches with volunteers and give press statements about how we wants to work), Europe continues to make us look good by comparison.

Turns out all of that was a total load of BS. Indeed, the IMF just announced the following:

Nobody knows the true scale of potential losses at Europe’s banks, but the International Monetary Fund hinted at the enormity of the problem this month, saying that Spanish and Italian banks face 230 billion euros ($310 billion) of losses alone on credit to companies in the next two years.

Yet five years after the United States demanded its big banks take on new capital to reassure investors, Europe is still struggling to impose order on its financial system, having given emergency aid to five countries.

Remember, Spain was the banking system that was great right up until it demanded a 100 billion Euro bailout. Then only six months later, one of its largest problem banks (which had taken 18 billion Euros in bailout funds) announced it still had a negative valuation.

The entire EU banking system is insolvent. Unlike the US where the banks raised capital to address their problems, EU banks have not raised capital nor have they reduced their leverage (of 26 to 1 by the way). Instead, they’ve simply swapped garbage assets as collateral to the ECB, which counts this garbage at 100 cents on the Euro, and issues liquidity to the banks.

The whole thing is one giant lie. You have banks lying about what they own to the ECB which lies about the real risk of the banks which swaps out debt from EU countries that are lying about their finances in exchange for free money so the banks can keep lying.

Honestly, this whole mess makes the US look good by comparison. The bad loans, leverage and every other negative issue is worse for EU banks than for the US.

Makes you wonder why investors are piling into EU financials, doesn’t it? In general share prices in this space have doubled since the 2012 lows. The fact they’ve doubled on a colossal lie doesn’t bode well. 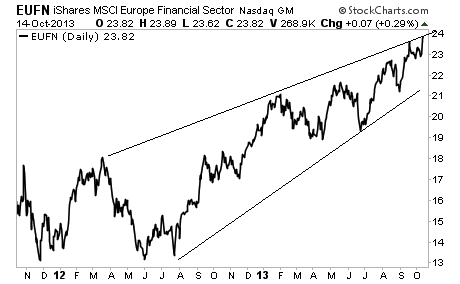 I expect we’ll see the European banking crisis back with a vengeance in the first half of 2014. Now that the German elections are over and Merkel has won, the “reality” of Europe should start leaking out (it’s not coincidence that the IMF released this report about Spanish and Italian bank woes just now after the German election as though this was suddenly “news”).