The Fed Has Learned There Is No Smooth Exit

The primary theme driving US stock markets, is that of whether the Fed will taper or not.

The mere fact that this is the single most important theme for the markets goes a long way towards explaining how busted our financial system has become. Before 2007, the talk concerned whether the Fed would change interest rates. Today we talk about whether scaling back from $85 billion in asset purchases per month represents tightening.”

At the end of the day, the fact is that the Fed can never exit its strategies. I realize there are a lot of smart people with smart explanations for why the Fed can exit, but they are missing a critical component: human nature.

We saw this in real-time back in May 2013 when the Fed first floated the idea of tapering its QE programs. The Fed had hoped it could float this idea and let the markets get used to it, instead interest rates spiked with rates on the 10-year moving up from 1.5% to nearly 3% in a matter of weeks. 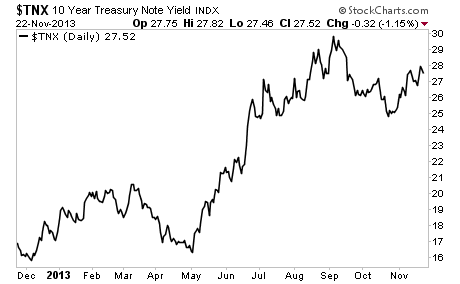 At the time, the financial media began to write articles about the market’s “taper tantrum” as though metaphorically aligning the capital markets with s spoiled brat explained the reaction.

The Fed then did a 180 despite all but promising it would taper QE. Bernanke even went so far as to negate the call for a taper in his July Q&A.

Why did he do this? It’s simple. He like the rest of the Fed saw in simple terms that there is no such thing as a smooth exit. The market rebelled at the mere hint of tapering at a time when the Fed is buying $85 billion per month. If the Fed were to actually go ahead and taper what would rates do?

Moreover, with the financial system now even more leveraged than it was going into 2007… what would happen if interest rates moved back to their historical averages of 4% on the ten year Treasury?

So now, there is talk of the Fed tapering in December. Maybe it will, maybe it won’t. I have no idea. No one does. If we were going to try to analyze the Fed’s moves via logic or economic fundamentals, we would have tapered months if not years ago.

Instead we’ll get more of the same: talk of taper to talk the markets down, then a surprise decision to not taper so market take off again. The Fed is now managing expectations more than anything. The Fed has acted in 90+% of the months since the Crisis began. This tells us precisely what the game plan is going forward.

f you are not preparing yourself for this, NOW is the time to do so.

With that in mind, I’ve already urged my Private Wealth Advisory clients to start prepping. We’ve opened a series of targeted investments to profit from any market correction going forward.

And if the market crashes… we could see literal fortunes.

During the EU Crisis we locked in 72 straight winning trades and not one loser, including gains of 18%, 28% and more.

I believe that when the next Crash comes, we’ll see similar success.

All for the the small price of $179: the annual cost of a Private Wealth Advisory subscription.