Why the Next Crisis Will Be Far Worse Than 2008

1) Total currency (actual cash in the form of bills and coins) in the US financial system is little over $1.2 trillion.

2) If you want to include money sitting in short-term accounts and long-term accounts the amount of “Money” in the system is about $10 trillion.

3) In contrast, the US bond market is well over $38 trillion.

4) If you include derivatives based on these bonds, the financial system is north of $191 trillion.

1) The bubble is not confined to one country (globally, the bond bubble is over $100 trillion in size).

2) The bubble is not confined to one asset class (all “risk” assets are priced based on the perceived “risk free” valuation of sovereign bonds… so every asset class will have to adjust when bonds finally implode).

4) When the bubble bursts, there will very serious political consequences for both the political elites and voters as the system is rearranged.

2) Central banks want/target inflation because it makes the debts more serviceable and puts off the inevitable debt restructuring.

3) Central banks are terrified of debt deflation (Fed Chair Janet Yellen herself admitted that oil’s recent deflation was economically positive) because it would burst the bond bubble and bankrupt sovereign nations. 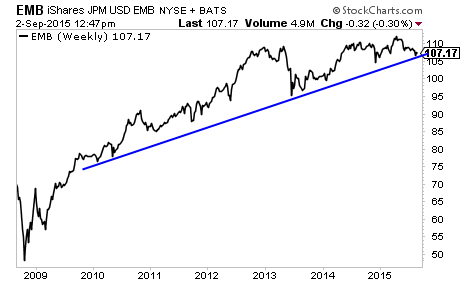