Will China’s Meltdown Trigger a Crash?

China is thought to be the great growth story of the post-2008 era. China’s economy not only bottomed before the developed world, but by most accounts, China was thought to be the engine that pulled the world out of recession, thanks to its near-clocklike hitting of 7%+ in GDP growth per year.

Today, China remains central to the notion that the world is in recovery. As Japan’s Abenomics gamble sputters out economically while Europe continues to deteriorate and seems at risk of even breaking apart, it is China and the US that are held up to be the last remaining sources of economic growth for global economy.

Of the two, China is the only one thought to be growing at a significant pace. The US’s “recovery” (if it can be called that) is effectively flat lining, producing data points that are normally associated with a recession.

China, on the other hand, is believed to be growing at 7%: not as rapid as the 9% growth we’re used to seeing, but still dramatically higher than any of large country.

Only the whole thing is bogus.

The largest investor fortunes in history were made during crises.

For that reason, we’ve launched a special options trading service designed specifically to profit from the coming crisis.

And the REAL crisis hasn’t even started yet!

We have an success rate of 72%(meaning you make money on more than 7 out of 10 trades)…and thanks to careful risk control, we haven’t had a losing trade since JUNE.

Our next trade goes out shortly… you can get it and THREE others for just 99 cents.

However, this deal expires TONIGHT at midnight… we cannot maintain this track record with thousands of traders following these trades.

To grab one of the last $0.99, 30 day trial subscriptions to THE CRISIS TRADER…

Firstly, China’s economic data points are fraught with accounting gimmicks. Indeed, they are so far removed from reality that back in 2007, current First Vice Premiere of China, Li Keqiang, admitted to the US ambassador to China that ALL Chinese data, outside of electricity consumption, railroad cargo, and bank lending is for “reference only.”

Put another way, if you want to get an ACCURATE picture of the true state of China’s economy, you have to ignore GDP and most other metrics, and electricity consumption, railroad cargo, and bank lending.

Of the three, rail freight volumes is the most significant as it is the hardest to fake. And according to China’s rail freight volumes, China’s economy is collapsing to levels on par with those last seen during the Asia Financial Crisis (H/T Ben Woodward)

Moreover, China’s banking system is imploding thanks to the bursting of its real estate, credit, and stock market bubbles. The Central Bank just cut interest rates again (the sixth time in a year) but you cannot put a bubble back together once it has burst. 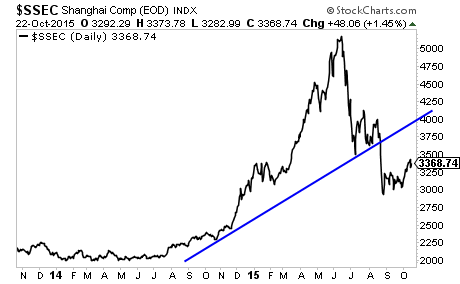 China is only the latest country to grow desperate. Globally the economy is once again contracting. Interest rates cuts and QE will be launched… but they won’t start a new bull market.

The great crisis has begun. And smart investors are preparing NOW before the Crash hits.

Private Wealth Advisory is a WEEKLY investment newsletter that can help you  profit from the markets.

Indeed, while other investors are getting whipsawed by the markets…we’ve just locked in two more winners, bringing our winning streak to 35 straight winning trades!

However, I cannot maintain this track record with thousands upon thousands of investors following these recommendations.

This entry was posted in It's a Bull Market and tagged China, collapse, contraction, crash, debt crisis, debt implosion, interest rates, meltdown, recession, slowdown. Bookmark the permalink.
This is the Last Bull Market Of Our Lifetimes