The US Dollar Rally Could Trigger a $9 Trillion Debt Implosion

The US Dollar rally, combined with the ECB’s policies and the Fed’s hint at raising rates in December, is at risk of blowing up a $9 trillion carry trade.

When the Fed cut interest rates to zero in 2008, it flooded the system with US Dollars. The US Dollar is the reserve currency of the world. NO matter what country you’re in (with few exceptions) you can borrow in US Dollars.

And if you can borrow in US Dollars at 0.25%… and put that money into anything yielding more… you could make a killing.

A hedge fund in Hong Kong could borrow $100 million, pay just $250,000 in interest and plow that money into Brazilian Reals which yielded 11%… locking in a $9.75 million return.

This was the strictly financial side of things. On the economics side, Governments both sovereign and local borrowed in US Dollars around the globe to fund various infrastructure and municipal projects.

Simply put, the US Government was practically giving money away and the world took notice, borrowing Dollars at a record pace. Today, the global carry trade (meaning money borrowed in US Dollars and invested in other assets) stands at over $9 TRILLION (larger than the economy of France and Brazil combined).

This worked while the US Dollar was holding steady. But in the summer of last year (2014), the US Dollar began to breakout of a multi-year wedge pattern: 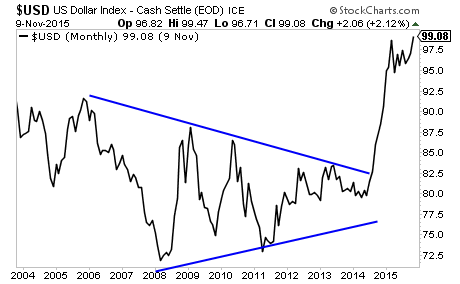 Because the minute the US Dollar began to rally aggressively, the global US Dollar carry trade began to blow up. It is not coincidental that oil commodities, and emerging market stocks took a dive almost immediately after this process began.

The below chart shows an inverted US Dollar chart (so when the US Dollar rallies, the chart falls), Brazil’s stock market (blue line), Commodities in general (red line) and Oil (green line). As you can see, as soon as the US Dollar began to rally, it triggered an implosion in “risk on” assets. 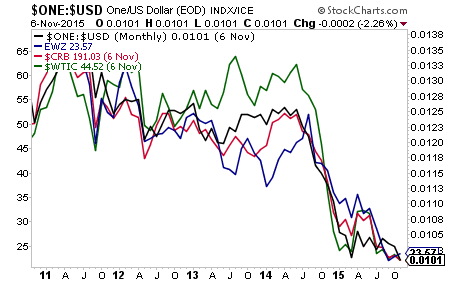 This process is not over, not by a long shot. As anyone who invested during the Peso crisis or Asian crisis can tell you, when carry trades blow up, the volatility can be EXTREME.

Indeed, the US Dollar as broken out of a MASSIVE falling wedge pattern that predicts a multi-year bull market. 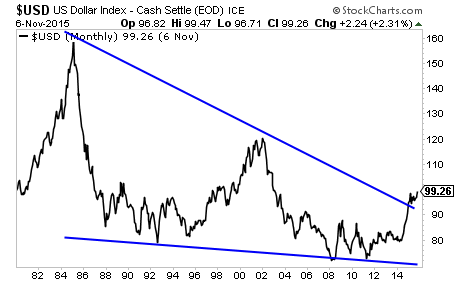 The market drop in August triggered by China devaluing the Yuan (another victim of the US Dollar bull market) was just the start. Once the US Dollar rally really begins picking up steam, we could very well see a crash.

Private Wealth Advisory is a WEEKLY investment newsletter that can help you  profit from the markets.

Indeed, while other investors are getting whipsawed by the markets…we’ve just locked in two more winners, bringing our winning streak to 35 straight winning trades!

However, I cannot maintain this track record with thousands upon thousands of investors following these recommendations.