This Economic Collapse Will Trigger a Stock Market Crash

We are in a global economic collapse.

And it is going to trigger a stock market crash.

The Central Bank fueled “recovery” is officially over. Central Banks propped up the financial markets for six years. But the money was spent on financialization and accounting gimmicks (buybacks).

We can see this clearly in a number of economic images.

Consider Oil, possibly the most economically sensitive commodity in the world.

When these industries are growing, demand for Oil increases. And this demand typically results in higher prices.

However, the price of Oil has collapsed, ending a 16-year bull market, and falling to levels not seen since 2004. 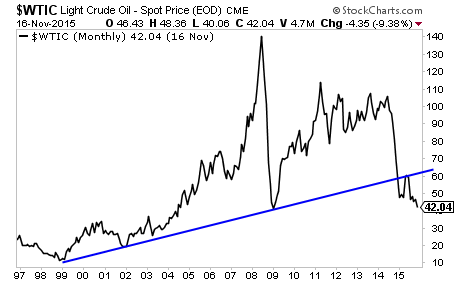 Here is the Commodity Index. It is made up of Oil, Copper, Tin, Wheat, and every other commodity you can think of. 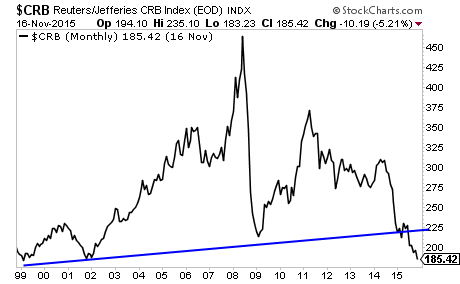 It too has ended a 16-year bull market. Based on the lack of economic demand, prices for Commodities are back where they were in 1999. It’s as though the last 16 years of “growth” has been erased as far as demand is concerned.

This is the REAL picture of the global economy. It isn’t what CNBC and the talking heads tell you. It is economic collapse.

And it is going to trigger a stock market Crash.

Stocks trade based on the profits they earn. With few exceptions, investors do not pay for a company that is not making any money.

Profits are derived from sales. Sales is the money coming “in the door.” Profit is what’s left after costs.

Sales growth for the S&P 500 has collapsed since 2012. Today it is barely positive, registering a level not seen since the 2008 collapse. 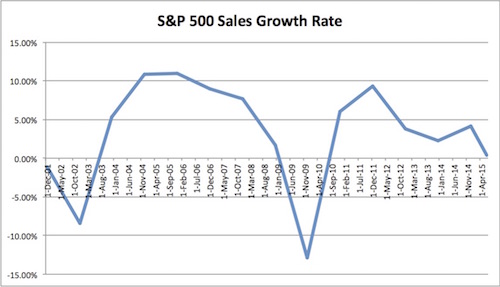 Another Crash is coming, driven by the economic collapse.