Is the Bull Market Over? These Charts Say So

For weeks we have been warning not to trust the bounce in stocks. We were worried that a Bear Market had begun.

The most critical item we were concerned with was the fact that the S&P 500, despite its massive bounce, had failed to regain its former trendline. This would suggest a Bear Market was possibly about to begin

As we first noted back in early September, Bear Markets do not happen all at once. EVERY time a major top has formed and stocks have taken out their Bull Market trendline, we’ve had a bounce to “kiss” the line before the Bear Market really took hold. 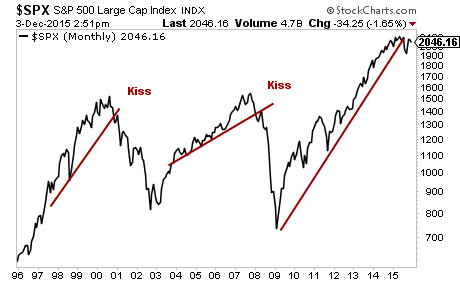 This is precisely what has happened with the October bounce: stocks rose to “kiss” the former trendline, but failed to reclaim it. 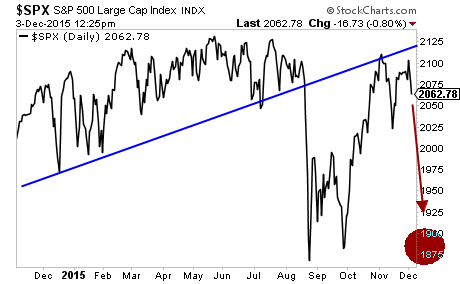 Having failed to reclaim this line twice, the S&P 500 is now turning sharply down. The financial media sees this as a reaction to ECB President Mario Draghi’s failure to do “enough” this morning, but the reality is that this was not to be trust, driven primarily by manipulation with little carry through from REAL buy orders.

In the near term stocks could crater to 1900 in short order. However, what happens in the next few days or even weeks is not the real concern.

The REAL concern pertains to the BIG PICTURE for the markets: the massive monthly rising wedge pattern stocks have been forming since the 2009 bottom.

As you can see in the chart below, the August-September collapse broke this formation. That, in of itself, is not the be all end all. But the fact that stocks have failed to reclaim their former bull market trendline is a MAJOR concern indicating that it is highly likely that the bull market begun March 2009 is OVER. A Bear Market will have begun. 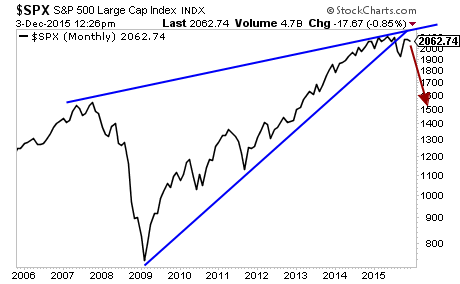 If this is the case, the next Crash has already begun. This would put us at the equivalent of where the markets were in late 2007: just before the whole mess came crashing down in 2008.

Smart investors are preparing now. The August-September correction was just a warm up. The REAL drop is coming shortly.