The Fed is About to Trigger a $9 Trillion Debt Implosion

The US Federal Reserve (Fed) and European Central Bank (ECB) have created a very dangerous situation.

Throughout the last six years, there has been a sense of coordination between the Fed and ECB. This was evident both in terms of where capital went as well as how it was delivered via monetary policy.

For instance, when the Fed released its discount window documents in 2011, it became clear that most of the funds from QE 2 actually went to foreign banks located in the EU.

That point is today…

Most investors believe that trading options is both risky and dangerous.

Our options service THE CRISIS TRADER has a success rate of 72% meaning we make money on more than seven out of 10 trades.

Even if you include ALL of our losers, we are up 43% year to date.

That’s correct, with minimal risk, we are outperforming the S&P 500 by 41%… and the year isn’t even over yet.

Our next trade goes out tomorrow morning… you can get it and THREE others for just 99 cents.

The Euro comprises 56% of the basket of currencies against which the US Dollar is valued. As such, the Euro and the Dollar have a unique relationship in which whatever happens to the one will have an outsized impact on the other.

While significant, the interest rate differential was not enough to kick off a complete flight of capital from the Euro to the US Dollar. However, when the ECB launched NIRP, cutting its deposit rate to negative 0.1%, the rate differential (now 0.35%) and punitive qualities of NIRP (it actually cost money to park capital in the Euro) resulted in vast quantities of capital fleeing Euros and moving into the US Dollar.

Soon after, the US Dollar erupted higher, breaking out of a multiyear triangle pattern and soaring over 25% in a matter of nine months. 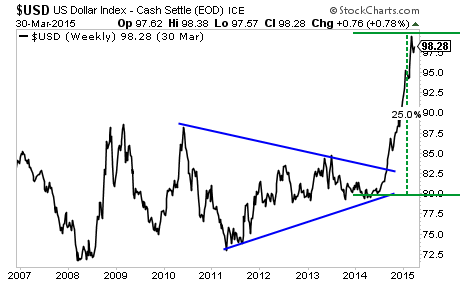 To put this into perspective, this move was larger in scope than the “flight to safety” that occurred in 2008 when everyone thought the world was ending.

The reason this is problematic?

There are over $9 trillion in borrowed US Dollars sloshing around the financial system. And much of it is parked in assets that are denominated in emerging market currencies (the very currencies that have imploded as the US Dollar rallied).

This is the US Dollar carry trade… and it is larger in scope that the economies of Germany and Japan… combined.

Now, the Fed is talking of raising interest rates. Even a symbolic rate hike to 0.3% or 0.5% could trigger a complete implosion of the $9 trillion US Dollar carry trade.

If you think this is just fear mongering, you’re mistaken. The Treasury Dept. issued emergency kits to employees a few months ago in anticipation of systemic volatility during the rate hike. Similarly, the Fed boosted the size of its market operations department in Chicago case the NY Fed loses control of the system when rates increase.

In short, we could very well be on the eve of another systemic crisis. The financial elites have been preparing for this for months.

Private Wealth Advisory. is a WEEKLY investment newsletter with an incredible track record.

During that time, you’ll receive over 50 pages of content… along with investment ideas that will help you make you money… ideas you won’t hear about anywhere else.

If you have not seen significant returns from Private Wealth Advisory. during those 30 day, just drop us a line and we’ll cancel your subscription with no additional charges.

To take out a $0.98, 30-day trial subscription to Private Wealth Advisory.