The Fed Rate Hike Will Trigger a $9 Trillion Meltdown

It is the first rate hike in 10 years. And it is now clear that the Fed is not only behind the ball in terms of raising rates… but that it has now primed the financial system for another 2008-type meltdown.

By way of background we need to consider the relationship between the US Dollar and the Euro.

The Euro comprises 56% of the basket of currencies against which the US Dollar is valued. As such, the Euro and the Dollar have a unique relationship in which whatever happens to the one will have an outsized impact on the other.

Here’s why the Fed’s decision to raise rates will implode the financial system.

While significant, the interest rate differential was not enough to kick off a complete flight of capital from the Euro to the US Dollar. However, when the ECB launched NIRP, cutting its deposit rate to negative 0.1%, the rate differential (now 0.35%) and punitive qualities of NIRP (it actually cost money to park capital in the Euro) resulted in vast quantities of capital fleeing Euros and moving into the US Dollar.

Soon after, the US Dollar erupted higher, breaking out of a multiyear triangle pattern and soaring over 25% in a matter of nine months. 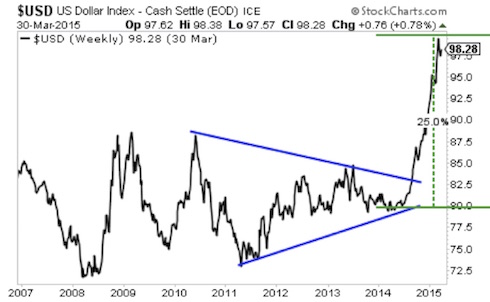 To put this into perspective, this move was larger in scope than the “flight to safety” that occurred in 2008 when everyone thought the world was ending.

The largest investor fortunes in history were made during crises.

For that reason, we’ve launched a special options trading service designed specifically to profit from the coming crisis.

And the REAL crisis hasn’t even started yet!

We have an success rate of 72%(meaning you make money on more than 7 out of 10 trades)…and thanks to careful risk control, we’re outperforming the S&P 500 by over 50%!

Our next trade is going out shortly… you can get it and THREE others for just 99 cents.

The reason this is problematic?

There are over $9 trillion in borrowed US Dollars sloshing around the financial system. And much of it is parked in assets that are denominated in emerging market currencies (the very currencies that have imploded as the US Dollar rallied).

This is the US Dollar carry trade… and it is larger in scope that the economies of Germany and Japan… combined.

Now, the Fed has raised interest rates to 0.5%. This has made the interest rate differential between the Euro and the US Dollar 0.75%. This will trigger a complete implosion of the $9 trillion US Dollar carry trade.

This is a long-term, multi-decade chart of the US Dollar. 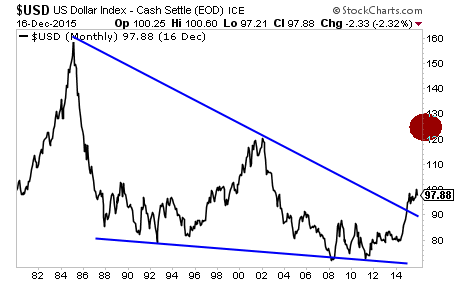 As you can see it has just broken out of the largest falling wedge pattern in monetary history. The chart predicts that during the next leg up, the US Dollar will rally to 120 or even 130.

At that point, the $9 trillion US Dollar carry trade will implode triggering a 2008-type event. Our timeline for this is within the next 12 months.

What is Private Wealth Advisory?

Private Wealth Advisory is a WEEKLY investment newsletter that can help you  profit from the markets. Every week you get pages of high quality editorial presenting market conditions and outlining the best trades to make to profit from them.

It is the only newsletter to have closed 72 consecutive winning trades in a 12 month period (ZERO losers during that time). And we just began another winning streak last year, already racking up 43 straight winners.

And we’ve only closed ONE loser in the last FOURTEEN MONTHS.

However, this offer will be expiring tomorrow at midnight. I cannot maintain a track record of over a YEAR of straight winners with thousands and thousands of investors following these recommendations.

To take out a $0.98 30-day trial subscription to Private Wealth Advisory… and lock in one of the few remaining slots….

This entry was posted in Debt Bomb, stock collapse?. Bookmark the permalink.
This is the Last Bull Market Of Our Lifetimes