Deflation is Back… Will It Lead to Another Crash?

Having cut interest rates over 600 times since 2009 (and printed over $15 trillion), they’ve yet to generate the expected economic growth.

Despite these failures, the ECB, and the Bank of Japan are currently engaging massive QE programs. The Fed is the only major Central Bank not rapidly expanding its balance sheet.

Why, after six years, are we still seeing such aggressive policies?

Because deflation, the bad kind, is once again lurking around the corner.

Anyone with a functioning brain knows that deflation is a good thing. No one complains when they are able to buy something at a lower price, whether it is a home, gasoline, or computer.

It is debt deflation that remains the primary focus for the global Central Banks. Indeed, if you consider the threat of debt deflation, every Central Bank move makes sense. ZIRP, NIRP, and QE all have the same goal in mind: to lower interest rates and push bonds higher (thereby making sovereign debt loads more serviceable).

With this in mind, even a whiff of debt deflation is enough to give Central Bankers nightmares. It’s also why they are so fond of inflation via currency devaluation, as it permits them to render massive debt loads more serviceable.

Unfortunately, the great “reflation experiment” is failing. Indeed, as Societe General has noted, it appears the developed world may be “turning Japanese” i.e. moving into a long-term deflationary cycle similar to that which has plagued Japan for the last 20 years.

That’s correct, with minimal risk, we are outperforming the S&P 500 by 35%… and the year isn’t even over yet! Heck, we just closed out another 30% winner earlier this week!

Our next goes out shortly… you can get it and THREE others for just 99 cents.

In Europe, despite three cuts into NIRP, the announcement of QE and an extension of QE, inflation is barely positive at 0.2%.

Then of course there is the US.

There, one of the better measures of inflation expectations is the 5 Year, 5-Year Forward Inflation Expectation Rate. That is simply a long way of saying that this chart measures where investors expect inflation to be in five years… and running for five years after that date. 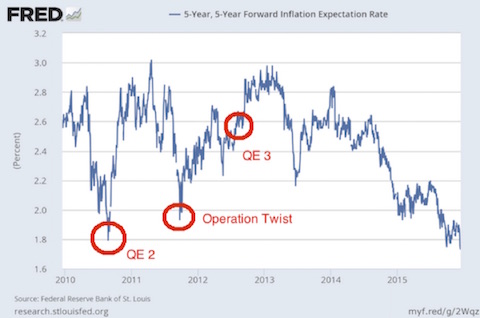 As you can see, inflation expectations have collapsed in the latter half of 2015. Post-2008, any time this measure has fallen below the Fed’s desired threshold of 2%, it has launched a new monetary policy. In 2010 it was QE 2. In 2011 it was Operation Twist.

We’re now well below that level. And this is AFTER six years of ZIRP and $4 trillion in QE!

Deflation is back… and as it rears its head again in the west, Western Central Banks will soon be forced to answer the question.

Can we actually stop deflation?

Unfortunately for them, the answer is likely no.

Japan has engaged in NINE QE programs since 1990. Since that time, the country’s GDP growth has been anemic at best. Indeed, even its latest MASSIVE QE program (a single monetary program equal to 25% of Japan’s GDP) only boosted Japan’s GDP for two quarters before growth rolled over again. Indeed, Japan is once again back in technical recession as of our writing this.

The reality is slowly beginning to sink in that Central Banks cannot put off the business cycle. They’ve spent over $15 trillion and cut interest rates over 600 times and all they’ve generated is one of the weakest recoveries on record.

What happens the next time global GDP takes a nosedive when Central Banks have already used up all of their ammunition?