One of the most frustrating aspects of today’s financial system is the fact that the Fed is being lead by lifelong academics with no real world banking or business experience.

Consider the cases of Ben Bernanke and Janet Yellen.

Moreover, there is a particular problem with academic economists. That problem is that a major percentage of their “research” is total bunk made up in order to make tenure.

This is not our opinion… it is fact based on research published by the Fed itself.

According to a paper published by researchers from THE FEDERAL RESERVE BOARD, it was not possible to replicate even HALF of the results found in economics papers EVEN WITH THE ASSISTANCE OF THE INDIVIDUALS WHO WROTE THE PAPER.

Let’s repeat that: even with the help of those who claimed to have found the results, the results were not replicable.

There is a word for a result that is not replicable. It’s imaginary.

This might go a long ways towards explaining how individuals like Ben Bernanke and Janet Yellen can continue to say with a straight face that they have a grip on the economy, when the results show that they are either completely lost or being dishonest.
———————————————————————–

That’s correct, with minimal risk, we are outperforming the S&P 500 by 35%… and the year isn’t even over yet! Heck, we just closed out another 30% winner yesterday!

Back in 2012, the Fed claimed it would start to raise rates when unemployment fell to 6.5%. We hit that target in April 2014. The Fed didn’t raise rates for another 20 months.

One wonders, just what was the legitimacy of the Fed’s “target” for raising rates. How on earth can you make a target, then move the target for nearly two more years and claim the target was even remotely accurate?

More importantly, if the Fed’s economic models suggested raising rates when unemployment was 6.5% and the Fed didn’t raise rates until unemployment was at 5% (a full 20 months later)… just how accurate are these models?

We might be nitpicking here, but if the models in question are being used to steer the US economy, there is an awful lot at stake here.

Let’s take a look at what happens when the Fed’s theories connect with the real world.

The Fed claims it cut rates to ZERO to boost the economy. The theory here is that if capital becomes cheaper, corporates and consumers will spend more, creating more jobs.

Unfortunately this is not how the real world works. For consumers, excessive debt is deflationary in nature in that at some point you are so in debt that making your debt load more serviceable accomplishes next to nothing in terms of solvency/ spending power.

Moreover, ZIRP is deflationary in nature for savers and those who rely on interest income because it makes them concerned about future returns on their capital. As a result of this, they tend to hoard their cash, not spend it.

The only individuals who benefit from ZIRP are the very wealthy and corporates, because both can use their assets to leverage up. And this is precisely what has happened.

We are currently on track for our FOURTH straight RECORD year for corporate bond issuance.

Why is this bad?

Because A) it means corporations are going massively in debt and B) they are doing this NOT to expand operations (economic growth doesn’t warrant this) but to issue buybacks and dividends.

With rates at zero, executives are leveraging up to generate shareholder returns. This works great in the short-term, but there is hell to pay down the road. And unfortunately we’re there.

Today US corporates are more leveraged than at any other point in history, including the Tech Bubble. 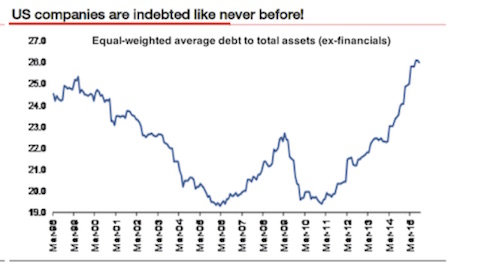 This is what happens when the Fed’s academic-based nonsense collides with economic realities: perversions of capital that lead to massive bubbles and eventually even more massive crises.

The Fed fueled the Tech Bubble, which lead to the Tech Crash.

And now it’s created an ever bigger bubble that that.

We are heading for a crisis that will be exponentially worse than 2008. The global Central Banks have literally bet the financial system that their theories will work. They haven’t. All they’ve done is set the stage for an even worse crisis in which entire countries will go bankrupt.