THREE Reasons Stocks Will Crater in 2016

Last year (2015) likely will represent the top for the bull market that began in 2009. Stocks finished the year down, representing the first down year since the March 2009 bottom.

Many analysts will point to the August sell-off as the reason stocks performed so badly, however, looking at the chart, stocks struggled throughout the year, long before the August sell-off. Indeed, at best the S&P 500 was up 3% for the year! 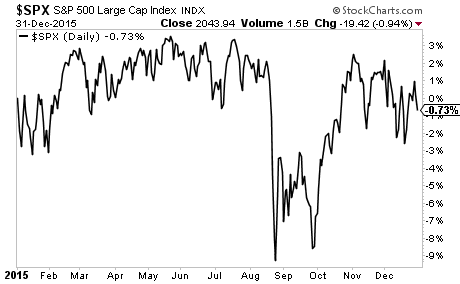 Things are only going to worsen from here.

Firstly, the US Federal Reserve is now tightening. From 2009-2015, the Fed was always implementing loose monetary policies whether it by through QE, Operation Twist, or simply juicing the markets during options expiration weeks.

No longer. The Fed is now raising rates. This will be a major issue for stocks going forward.

Secondly, the US economy is back in recession.

That’s correct, with minimal risk, we are outperforming the S&P 500 by 35%… and the year isn’t even over yet! Heck, we just closed out another 30% winner yesterday!

I don’t care what the Mainstream media says, based on the cold hard data points stripped of accounting gimmicks, the US entered a recession last year. This is backed up by:

With the Fed tightening, the recessionary drop is only going to accelerate.

Finally, corporate profits relative to GDP are at their record high and rolling over. 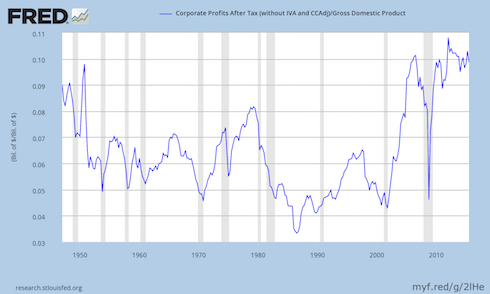 Corporate growth can be generated via three ways:

With the US back in recession and the Fed tightening, both #s 1 and 2 are over. This leaves #3. And while productivity did increase marginally in first half of 2015, it’s now rolling over again towards 0%.

In short, the sources of growth for US corporates have all dried up. Stocks have yet to adjust to this, but when they do it’s going to be an all out collapse.

That correct, during ALL of 2015, we’ve not closed a SINGLE LOSER.