The Fed Continues Giving Money to Wall Street Even Without QE

Stocks will likely rally this week for the simple reason that it is options expiration week.

The Fed almost always gives Wall Street extra money to play around with during options expiration.

Below is a table charting changes in the Fed’s balance sheet. Options expiration weeks are gray.

Mind you, this is during a period in which the Fed is not engaged in Quantitative Easing or any other major monetary program. And yet… it still feels the need to hand off an average of $9 billion or so to Wall Street every time options expiration rolls around.

Note also, that the Fed gave Wall Street money almost every week during December. For some reason Janet Yellen felt the need to expand the Fed’s balance sheet by $18 billion during the last month of a year in which most fund managers had performed terribly.

Despite this obvious gift to Wall Street, stocks finished 2015 DOWN. It was the first down year stock have experienced since 2008. And by the looks of the below chart, it’s only going to get worse in 2016! 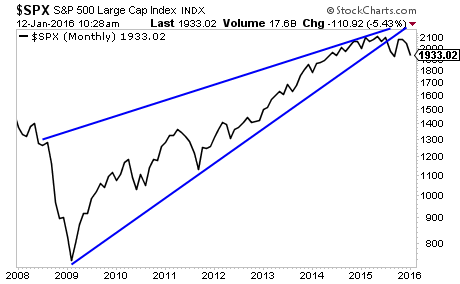 Over the last 14 months we’ve closed out 48 straight winning trades. That’s an average of nearly FOUR winners per month.