The Bond Bubble Has Begun Bursting

The bursting of the bond bubble has begun.

As I’ve outlined previously the primary concern for Central Banks is the bond bubble. CNBC and other financial media focus on stocks because the asset class is more volatile and so makes for better content, but the foundation of the financial system is bonds. And bonds are THE focus for Central Banks.

In the simplest of terms, the world is awash in too much debt. The bond bubble was close to $80 trillion in size going into 2008. The Central Banks had a choice to either let the defaults hit and clear out the garbage debt from the financial system or attempt to inflate the debts away.

They chose to attempt to inflate the debts away. Put differently, all of their policies were aimed at containing debt deflation… or the process through which debt becomes less and less serviceable leading to eventual insolvency and default.

As a result of this, the financial system has become even more leveraged than it was in 2007 at the beginning of the last debt crisis.

Globally the bond bubble has grown by more than $20 trillion since 2008. Today it is north of $100 trillion, with an additional $555+ trillion in derivatives trading based on it.

By not allowing the bad debts to clear in 2008, the Central Banks conditioned everyone from consumers to corporations to believe that business cycles could be contained and that the bond bubble/ bull market had not ended.

As a result of this, TRILLIONS of dollars of capital have been misallocated. The evidence is everywhere you look. Corporates around the globe have been issuing record amounts of debt, much of it in US Dollars.

Few of these bonds were high quality. Indeed, globally over 50% of all corporate bonds are now “junk.”

Chinese firms might be the most out of control when it comes to bond issuance, but they are hardly unique. As the below chart reveals, the pace of corporate debt issuance in Emerging Markets worldwide has been extraordinary relative to economic growth. 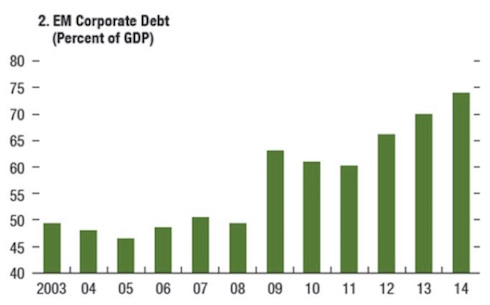 This has also been the case in the US where corporates have posted four straight years of record bond issuance.

Moreover, most of US corporate bond issuance is going towards stock buybacks and financial engineering (massaging results to look better than they are) NOT legitimate expansion.

As a result of this, the financial system today is even more leveraged with more garbage debt than it was going into 2008.

Over the last 14 months we’ve closed out 48 straight winning trades. That’s an average of nearly FOUR winners per month.