The Bursting of the Bond Bubble Has Begun Pt 2

As we wrote earlier this week, bursting of the bond bubble has begun.

The decision by Central Banks to “inflate” the system’s debts away post-2008 has resulted in the misallocation of trillions of Dollars of capital.

The worst offenders were Chinese corporates. China has created the single largest mountain of bad debt in the world. Indeed, things are so out of control in China that 45% of all proceeds from new bond issuance are being used just to pay off interest on old loans. 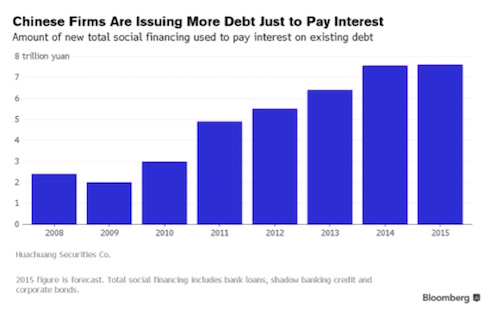 Chinese firms might be the most out of control when it comes to bond issuance, but they are hardly unique. In the US where corporates have posted four straight years of record bond issuance.

The bond market is booming again, a sign of investors’ faith in the resilience of the U.S. economy.

U.S. bond sales by companies with good credit ratings hit $103 billion in October, a record for the month, according to deal tracker Dealogic. Corporate-bond sales in the U.S. are on track for their fourth straight annual record, according to data from the Securities Industry and Financial Markets Association.

Today corporates are more leveraged than they were in 2007. Thus, the Bond Bubble not only encapsulates sovereign nations, but even individual companies. And now that bubble is bursting.

Companies have defaulted on $95bn worth of debt so far this year, with 2015 set to finish with the highest number of worldwide defaults since 2009, according to Standard & Poor’s.

The figures are the latest sign financial stress is beginning to rise for corporate borrowers, led by US oil and gas companies. The rising tide of defaults comes as investors reassess their exposure to companies that borrowed heavily in recent years against the backdrop of central bank policy suppressing interest rates…

Based on the number of defaults in the first three quarters of the year, S&P expects 109 defaults by year-end, the largest total since 268 borrowers ran into problems in 2009. There were only 60 defaults worldwide in 2014.

The high yield bond or junk bond market was the first to go. It’s already taken out its bull market trendline and is collapsing. 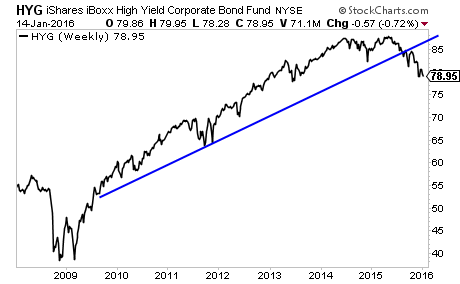 This is just the beginning. The bond bubble will take months to completely implode. And eventually it will consume even sovereign nations. Globally the bond bubble is $100 trillion in size: larger than even global GDP.

Over the last 14 months we’ve closed out 54 winning trades. That’s an average of more than FOUR winners per month.