The Next Crisis Has Begun

Last year we predicted that the world had reached peak centralization and that going forward things would begin to fracture.

Centralization is the process by which the world grows increasingly centralized, relying on Centralized organizations (Central Banks, sovereign governments, etc.) to determine the direction of capital and focus.

From an investment perspective, from 2008 to mid-2014, the primary driving force for the markets was Central Banks. In the US, the S&P 500 tracked the expansion of the Fed’s balance sheet closely. 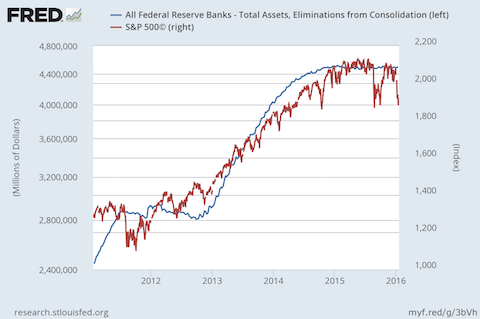 However, once the US Dollar carry trade began to blow up in mid-2014, this period ended. From that point onwards, the US Dollar was the driving force in the financial system.

How is this possible?

The US Dollar carry trade is $9 trillion in size. To put this in perspective, it is as large as the economies of Japan and Germany combined.

If you’re unfamiliar with the concept of a carry trade, it occurs when you borrow in one currency, usually at a very low interest rate, and then invest the money in another security, whether it be a bond, stock or what have you, that is denominated in another currency.

Everyone from currency traders to emerging market corporations were doing this from 2008 onwards. Emerging Market corporations alone have over $3 trillion in US Dollar dominated bonds outstanding. It those bonds were a country it would be the fifth largest in the world.

Now, a carry trade only works if the currency you borrow stays flat or falls in value. If the currency begins to rally, you blow up VERY quickly as the debt (the money you borrowed) quickly becomes more expensive or less serviceable.

As a result of this, when a carry trade begins to blow up, a feedback loop quickly hits as those who borrowed in the original currency either A) default B) restructure or C) return the money, forcing the currency even higher which triggers more defaults, restructuring and margin calls.

This is why when the US Dollar began to rally in mid-2014, it went nearly vertical. 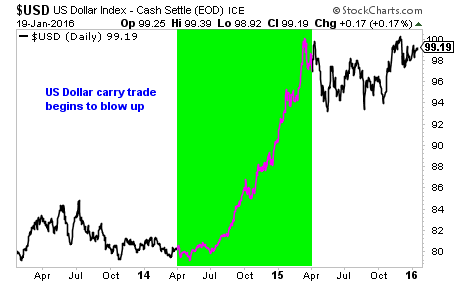 The first wave of the US Dollar carry trade blowing up crushed commodities and the emerging markets that rely on them for growth. I’m talking about Brazil, Russia, and the like.

However, it is the second wave that will be even more damaging. That wave began last year in August when China was forced to devalue the Yuan against the US Dollar. At that point the US Dollar bull market was no longer forcing individual asset classes to collapse… it was imploding one of the largest economies on the planet.

This crisis has only just begun.

The 1997 Asian Crisis was triggered by Thailand devaluing the baht. Thailand’s economy is the 30th largest in the world. And it nearly blew up all of Asia.

China, by way of contrast, is either the second or third largest economy in the world depending on how you measure it. And it is now actively devaluing the Yuan. Just based on this alone, you can expect this crisis to be significantly larger than the 1997 Asian Crisis.

However, this is just China. Remember there are $9 trillion in US Dollars floating around in various carry trades. So China’s devaluation will be just the tip of the iceberg as every fiat currency in the world derives a portion of its value based on where the US Dollar trades. What’s happening in China will be rippling throughout the system taking down entire countries/ currencies/ and stock markets.

Over the last 14 months we’ve closed out 61 winning trades. That’s an average of more than FOUR winners per month.

This entry was posted in stock collapse?. Bookmark the permalink.
This is the Last Bull Market Of Our Lifetimes