Did Japan Just Prove that Central Banks Are Out of Ammo?

The world has yet to fully digest what is currently happening in Japan.

Japan is the global leader for Keynesian Central Banking insanity. The ECB and US Federal Reserve began implementing ZIRP and QE after 2008. The Bank of Japan has been employing both ZIRP and QE since 2001.

Put simply, by the time the Great Crisis of 2008 rolled around, the Bank of Japan had nearly a decade’s experience seeing what QE, ZIRP, and the like could accomplish.

On top of this, the Bank of Japan has been the single most aggressive Central Bank post-2008. In 2013, it launched a single QE program equal to roughly 25% of Japan’s GDP (the Fed’s largest program was less than 10% of GDP).

As if this wasn’t insane enough, the Bank of Japan then expanded the program, not because it was working, but because doing so would result in its models appearing more accurate.

In short, the Bank of Japan crossed the Rubicon long ago as far as monetary insanity goes.

Which is why it’s critical to note two things:

Regarding #1, this is an implicit admission that QE doesn’t generate GDP growth. Anyone who’s studied QE knew this already, but it’s an incredible admission from a Central Banker. These are the people responsible for instilling confidence in the system.

The illusion that QE is anything other than a market prop is over. The BoJ has admitted QE doesn’t generate economic growth. This is confirmed by the fact that it only boosted the stock related component of its current QE program, NOT the bond-buying component.

Mind you, this is AFTER Japan entered a recession, which only gives credence to Kuroda’s admission that QE cannot generate GDP growth.

However, the big news is that despite the boost in ETF purchases, Japan’s Nikkei has collapsed, taking out the bull market trendline running back to the first hint of Abenomics back in late-2012. 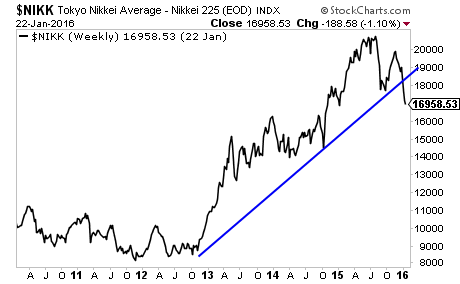 In short, not only has the Bank of Japan admitted QE is not a successful tool for boosting GDP, but we’ve reached the point at which even increases in QE are no longer having the desired effect

The markets have yet to digest this, but when they do, it’s going to be one heck of a show.