Japan Just Lit the Fuse on a $9 Trillion Debt Implosion

Thus, between Japan and Europe, over 20% of the world’s GDP is being managed by a Central Bank with NIRP.

More importantly, TWO major currencies in the world are now at NIRP while the US Dollar is at 0.5%.

Because hundreds of billions of Dollars in capital will be fleeing Japan to come to the US.

The US Dollar has been in a bull market since mid-2014. It is not coincidence that it started when the Euro first went to NIRP: the minute the EBC implemented NIRP money began fleeing the Euro and moving into the US Dollar. 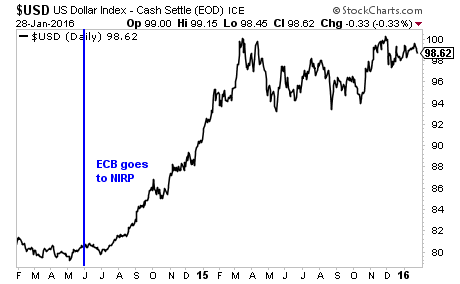 There are over $9 trillion in BORROWED US Dollars sloshing around the financial system.

ALL of this DEBT is at risk of blowing up when the US Dollar began to rally. And now that both Europe AND Japan are implementing NIRP, the US Dollar bull market is only going to get worse.

The US Dollar has broken out of the single BIGGEST falling wedge pattern in history. You are looking at a 40 year chart pattern that has been broken. 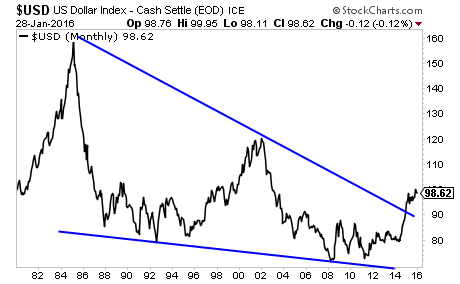 This tells us that something absolutely MASSIVE is happening in the financial system right now. That “something” is the beginning of a $9 trillion debt implosion.

And in the LAST FOURTEEN MONTHS, we’ve not closed a SINGLE loser.