The Great Crisis Has Begun (Oil is Just the Beginning)

It would be a lot easier to be bullish today if the entire financial system wasn’t based on fraud and BS.

Every explanation we see regarding the bull market in stocks is really just a cover for the fact that Central Banks spent $14 trillion propping up the bond bubble.

Here’s the reality of things.

———————————————————————–
Bonds, particularly sovereign bonds, are the bedrock of the financial system. US Treasuries are considered the “risk free” rate of return. Every other asset in the world is valued based on its perceived risk relative to Treasuries.

However, Treasuries have become horribly mispriced because the Fed and other Central Banks have tried to corner the global sovereign bond market.

This worked for about five to six years until the dark economic realities that Central Banks attempted to paper over began to appear.

In this particular instance, the economic realities concerned the fact that China, which was thought to have pulled the world out of recession in 2009, (courtesy of trillions of Dollars in credit expansion), was in fact an enormous debt Ponzi scheme dressed up as a “miracle.”

Indeed, you can think of China as the poster child for the Keynesian believe that you can print your way to growth. The only way China pulled off the fraud for so long was by publishing fictitious economic numbers.

Speaking of which, as far back as 2007, current First Vice Premiere of China, Li Keqiang, admitted to the US ambassador to China that ALL Chinese data, outside of electricity consumption, railroad cargo, and bank lending is for “reference only.”

However, it took until 2014 for a critical mass of investors to discover this for themselves. When they did, economically sensitive commodities such as Oil and Copper imploded.

Indeed, looking at the chart, one could argue that the “recovery” ended in 2011. But it wasn’t really until 2014 or so that the economic realities of NO growth (particularly in China) became obvious and both commodities collapsed. 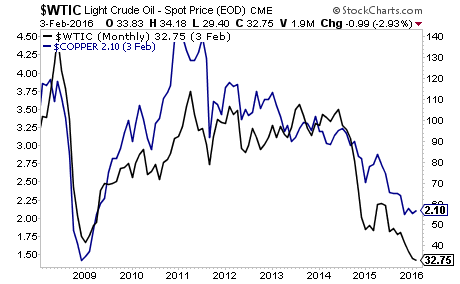 Anyone who claims that the carnage is isolated to Energy is not paying attention. We will repeat what we said earlier: when sovereign bonds are mispriced, EVERYTHING is mispriced. This includes US stocks, emerging market stocks, commodities, corporate bonds, municipal bonds, etc.

Oil and Copper are just the tip of the iceberg, Globally, the financial system is 30% more leveraged than it was in 2008. And this time around Central Banks have already used up 90%+ of their ammo papering over the 2008 mess.

Another Crisis is brewing…

Last week we closed three more winners including gains of 36%, 69% and a whopping 118% bringing us to 67 straight winning trades.