One of the most critical lines to watch is the 12-month moving average for stocks. 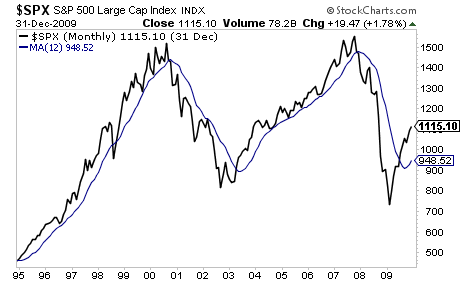 As you can see, this line was a great metric for targeting when to enter or exit the markets.

The significance of this line was somewhat obscured by Fed policy post-2009. Put simply, anytime stocks broke below the critical 12-month moving average, the Fed unveiled a new monetary program to reignite the bull market. 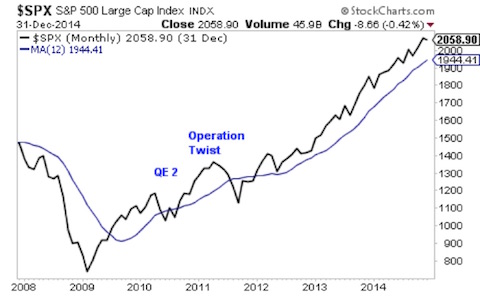 However, starting in 2011, the Fed got its wish (a long-term bull market) by convincing enough investors that whenever stocks collapsed into dangerous territory, the Fed would stop in. From that point onward, stocks stayed above the 12-month moving average.

The China Yuan devaluation in August 2015 triggered a sharp sell-off for stocks that took us below the 12-month moving average. The bulls tried desperately to reclaim this line in October-December but have failed. 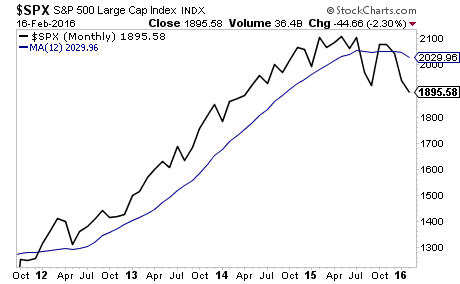 On top of this, the Fed is now tightening rates. And with a US Presidential election only nine months away, the Fed’s hands are tied regarding another QE program (the fact the Fed’s policies have increased wealth inequality has become a campaign issue).

Which means… stocks have very likely just entered a bear market. Few investors have caught on to this yet, but when they do, there will be a selling panic, possibly even a CRASH.

Yesterday we closed out THREE more double digit winners (all of them opened just two weeks ago) bringing our current winning streak to 75 straight winning trades,

With a track record like this, we’re getting a LOT of attention, so we’re going to be raising the price of a Private Wealth Advisory in the next few weeks.

However, you can try it right now for 30 days for just 98 cents… but you better move fast, because these slots are selling out!!!

To lock in a $0.98, 30-day trial subscription to Private Wealth Advisory…