Are Cash Bans Coming to the US? Pt 1

The global Central Banks have declared War on Cash.

Historically, one of the safest things to do when the markets begin to collapse is to move a significant portion of your holdings to cash. As the old adage says, during times of deflation, “cash is king.”

The notion here is that cash is a safe haven. And while earning 1-2% in interest doesn’t do much in terms of growing your wealth, it sure beats losing 20%+ by holding on to stocks or bonds during their respective bear markets

However, in today’s world of fiat-based Central Planning, cash represents a REAL problem for the Central Banks.

The reason for this concerns the actual structure of the financial system. As I’ve outlined previously, that structure is as follows:

When looking over these data points, the first thing that jumps out at the viewer is that the vast bulk of “money” in the system is in the form of digital loans or credit (non-physical debt).

Put another way, actual physical money or cash (as in bills or coins you can hold in your hand) comprises less than 1% of the “money” in the financial system.

Here is the financial system in picture form. I’m not including hard assets such as gold, real estate, or the like. We’re only talking about relatively liquid financial assets items that can be sold (turned into cash) quickly. 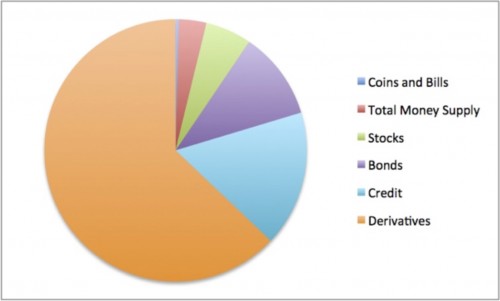 Of course, Wall Street will argue that the derivatives market is notional in value (meaning very little of this is actually “at risk”). However, even if we remove derivatives from the mix, the system is still very clearly based on credit, with only a small sliver of actual physical cash outstanding: 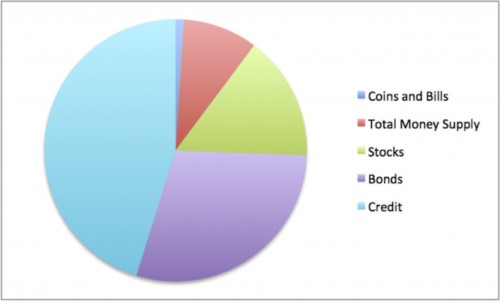 Put simply, the vast majority of wealth in the US is in fact digital wealth that moves from bank to bank without ever being converted into actual physical cash.

As far as the Central Banks are concerned, this is a good thing because if investors/depositors were ever to try and convert even a small portion of this “wealth” into actual physical bills, the system would implode (there simply is not enough actual cash).

Remember, the current financial system is based on debt. The benchmark for “risk free” money in this system is not actual cash but US Treasuries.

In this scenario, when the 2008 Crisis hit, one of the biggest problems for the Central Banks was to stop investors from fleeing digital wealth for the comfort of physical cash. Indeed, the actual “thing” that almost caused the financial system to collapse was when depositors attempted to pull $500 billion out of money market funds.

A money market fund takes investors’ cash and plunks it into short-term highly liquid debt and credit securities. These funds are meant to offer investors a return on their cash, while being extremely liquid (meaning investors can pull their money at any time).

This works great in theory… but when $500 billion in money was being pulled (roughly 24% of the entire market) in the span of four weeks, the truth of the financial system was quickly laid bare: that digital money is not in fact safe.

To use a metaphor, when the money market fund and commercial paper markets collapsed, the oil that kept the financial system working dried up. Almost immediately, the gears of the system began to grind to a halt.

When all of this happened, the global Central Banks realized that their worst nightmare could in fact become a reality: that if a significant percentage of investors/ depositors ever tried to convert their “wealth” into cash (particularly physical cash) the whole system would implode.

As a result of this, virtually every monetary action taken by the Fed since this time has been devoted to forcing investors away from cash and into risk assets. The most obvious move was to cut interest rates to 0.25%, rendering the return on cash to almost nothing.

However, in their own ways, the various QE programs and Operation Twist have all had similar aims: to force investors away from cash, particularly physical cash.

After all, if cash returns next to nothing, anyone who doesn’t want to lose their purchasing power is forced to seek higher yields in bonds or stocks.

The Fed’s economic models predicted that by doing this, the US economy would come roaring back. The only problem is that it hasn’t. In fact, by most metrics, the US economy has flat-lined for several years now, despite the Fed having held ZIRP for 5-6 years and engaged in three rounds of QE.

Let me put this very bluntly. The Fed and other Central Banks literally took the nuclear option in dealing with the 2008 bust. They have done everything they can to trash cash and force investors/ depositors into risk assets. But these polices have failed to generate growth.

Rather than admit they are completely wrong, Central Banks are reverting to more and more extreme measures to destroy cash and force investors to move into risk against their will.

Over 20% of global GDP is currently sporting NEGATIVE yields on their bonds.

This is just the start of a much larger strategy of declaring War on Cash.

Yesterday we closed out THREE more double digit winners (all of them opened just two weeks ago) bringing our current winning streak to 74 straight winning trades,

With a track record like this, we’re getting a LOT of attention, so we’re going to be raising the price of a Private Wealth Advisory in the next few weeks.

However, you can try it right now for 30 days for just 98 cents… but you better move fast, because these slots are selling out!!!

To lock in a $0.98, 30-day trial subscription to Private Wealth Advisory…