The Markets Are Misreading the Data

The US markets are in a quandary.

On the one hand, some of the data (GDP growth, unemployment, etc.) suggests the Fed should continue to hike rates. On the other hand, other data points (food stamp usage, labor participation rate) suggest the US never actually entered a real recovery.

More importantly, how can the jobs data suggest such a strong employment situation… when one in seven Americans are on food stamps?

Let us, consider how the Labor Department calculates the unemployment numbers… those same numbers that the ENTIRE stock market reacts to every few weeks.

Every month, the US Government conducts a “Current Population Survey” through which it calls or visits 60,000 US households and asks them questions about their current employment or lack thereof. This usually occurs on the week of the month containing the 12th.

Even if you include ALL of our losers, we are up 25% year to date.

That’s correct, with minimal risk, we are outperforming the S&P 500 by 33%... and the year only just started!

Thus, in order for the survey to be accurate…

1)   The US Government official has to make the phone call or go in person to the house (there have been some controversies regarding falsifying results).

2)   Someone has to pick up the phone or answer the door when the Government employee calls or visits.

4)   The person has to answer the interview questions truthfully (more on this shortly).

5)   The Labor Department’s economic model has to take this information and accurately render it into a nationwide unemployment number.

Thus, for the numbers to be accurate, the person being interviewed has to be willing to talk honestly to the US Government about personal details that could be quite embarassing.

Why is this a problem?

Consider that as far back as 2003, 30% of Americans viewed the US Government as an “immediate threat” to their “rights and freedoms.” Post 2008, the number has jumped to just below 50%.

Again, nearly half of Americans see the US Government as an “immediate threat.” 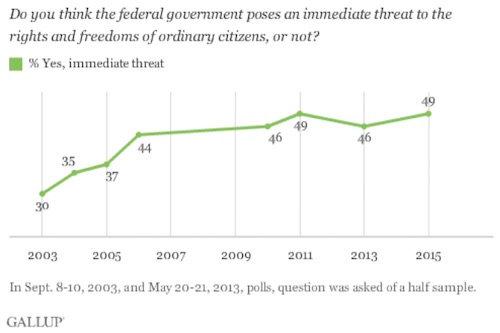 Thus, by proxy, roughly half of the people answering the phone or door for the Labor Department’s Current Population Survey have this view. What are the odds these individuals will be forthright and comfortable discussing the details of their family’s employment situation with a US Government official?

Even if the official is doing their absolute best to get correct information, the survey respondent might not be totally honest!

To top it off, there is debate as to what is the best means of interpreting the raw data. For instance, the Richmond Fed’s NEI measure (which measures those out of the labor force as well as those who are unemployed) puts current unemployment above 8% WAY above the “official” reading of 5.0%!!!

Even after all of this, there are the revisions to consider… Heck, the Bureau of Economic Analysis revised three years worth of GDP growth data DOWN from 2.3% to 2.0% in July of last year.

For this reason and others, we believe that the recovery has been greatly overstated in the media and that the markets are primed for a collapse. Indeed, we’ve already taken out the bull market trendline dating back to the 2009 bottom. 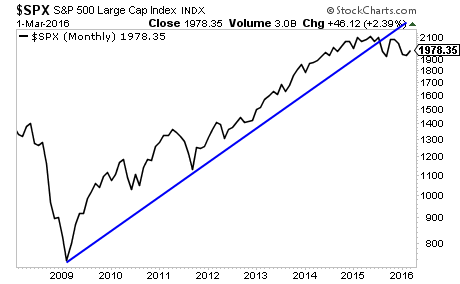 We fully believe this to be the case. And when this bubble bursts, it will trigger a crash that will make 2008 look like a picnic.

Last week we closed three more winners including gains of 36%, 69% and a whopping 118% bringing us to 75 straight winning trades.

This track record is a getting a ton of attention, so we are going to be closing the doors on our current offer to explore Private Wealth Advisory at the end of this month.