Here’s the Bounce… Is the REAL Market Collapse Just Around the Corner?

When it comes to analyzing long-term trends, the 10-month moving average has been a great metric for charting long-term bull market vs. bear market changes.

The 10-month moving average has been a great metric for charting long-term bull vs. bear market changes.

Generally speaking (there are of course exceptions) when stocks break above this line, they’re in a bull market. When they break below it, they’re entering a bear market.

However, when you’re transitioning from a bull to a bear market, stocks usually follow a specific pattern in which there is a bounce to “kiss” former support as the bulls attempt to reignite the lost momentum.

It is only after the “kiss” (the bulls fail) that the real collapse begins.

Again, the pattern is: 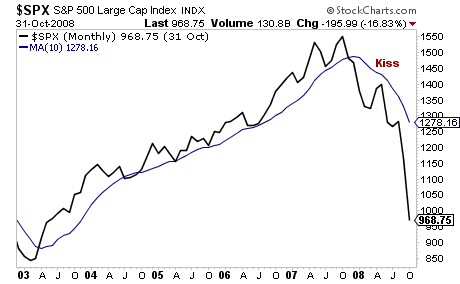 As you can see, throughout the bull market from 2003 to 2007, stocks remained above the 10-month moving average. Indeed, often this line served as key support when stocks began to lose momentum.

And after the “kiss” came the real collapse. 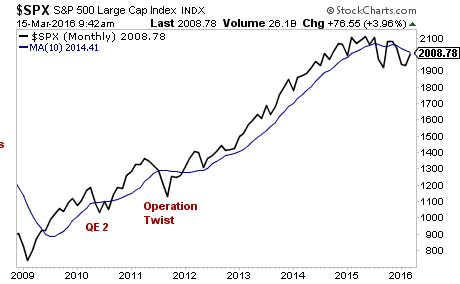 As you can see, once again the 10-month moving average has been a critical line of support for the market.

Initially, stocks struggled to remain above this line during 2010 and 2011. However, the Fed was quick to step in with major monetary policies (QE 2 and Operation Twist respectively) and stocks soon reclaimed the line

From 2012 onward, we were in a full-blown bull market with the 10-month moving average offering critical support.

The meltdown in mid-2015 resulted in stocks taking out this line with conviction. They have since attempted to reclaim the line, but failed. We’re now moving in for another attempt (a “kiss”). 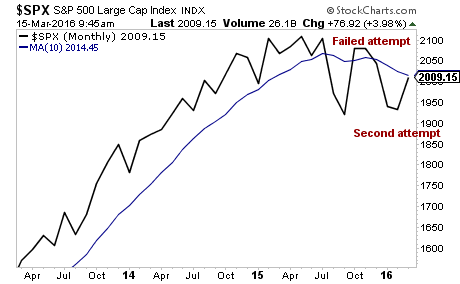 Unless stocks can reclaim this line, then we’re entering a full-scale bear market.

Remember, the last two times stocks fell below this line (2011 and 2012) the Fed moved to implement a major monetary policy.

This time around, the Fed is RAISING RATES.

A bear market is looming, are you prepared?

To wit… in the last 16 months we’ve closed out  75 straight winning trades.