Inflation is Here and the Fed Wants More

The Fed failed to hike interest rates in March despite the “data” hitting levels at which the Fed said it would hike. Indeed, the Fed even lowered its expected number of rate hikes for this year from four to two!

This confirms for us that the Fed does indeed want inflation.

In the last few weeks, several Fed officials, most notably Fed Vice-Chair Stanley Fischer stated not only that inflation was appearing in the US but that this is something the Fed “would like to happen.”

In separate prepared remarks in Washington, neither Fed Vice Chairman Stanley Fischer nor Gov. Lael Brainard made direct reference to next week’s meeting of the Federal Open Market Committee. But Brainard argued for patience in rate increases amid possible risks that inflation and U.S. economic activity will fall.

“Tighter financial conditions and softer inflation expectations may pose risks to the downside for inflation and domestic activity. From a risk management perspective, this argues for patience as the outlook becomes clearer,” Brainard said.

Inflation is showing signs it could accelerate in the United States, a top Federal Reserve policymaker said in comments that back the view that the central bank will hike interest rates again this year.

“We may well at present be seeing the first stirrings of an increase in the inflation rate,” Fed Vice Chairman Stanley Fischer said on Monday in prepared remarks, adding that faster inflation was “something that we would like to happen.”

With that in mind, take note that the Fed is finally achieving this, with US Core inflation well above the Fed desired rate of 2%:

Moreover, “sticky inflation” (considered by some to be the purest “official” measure of inflation) has hit 3%. 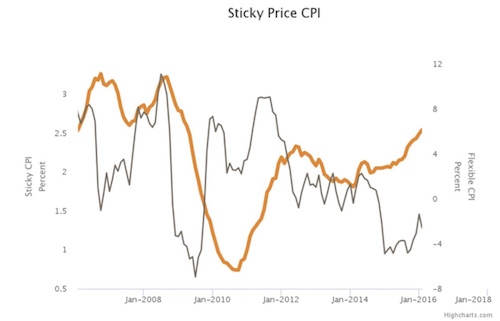 And finally, the Cleveland Fed’s Median CPI is growing at an annualized rate of 2.8%.

According to the Federal Reserve Bank of Cleveland, the median Consumer Price Index rose 0.2% (2.8% annualized rate) in February…

The Fed is cornered. Inflation is back. And Gold and Gold-related investments will be exploding higher in the coming weeks.

To wit… in the last 16 months we’ve closed out  77 straight winning trades.

That is not a typo…

Indeed, we just closed out two more double digit winners yesterday: gains of 10% and 40% opened just a few weeks before