The Fed has backed itself into a corner.

For seven years now we’ve been told the US is in a recovery. However, if this were the case, the Fed would have started raising rates years ago (likely in 2012). No other recovery on record saw the Fed maintaining ZIRP for so long.

There is simply no factually credible argument for why rates should be ZIRP if the economy is expanding. You cannot have claims of a “recovery” or expansion while ZIRP is in place. ZIRP is meant to be an emergency policy meant to pull the economy out of a severe recession, NOT a long-term program.

In pictoral form, the red line in the chart below negates the blue line. There is simply NO WAY that GDP expansion is even close to accurate if rates have to be kept at zero for six years after the recession “ended.” 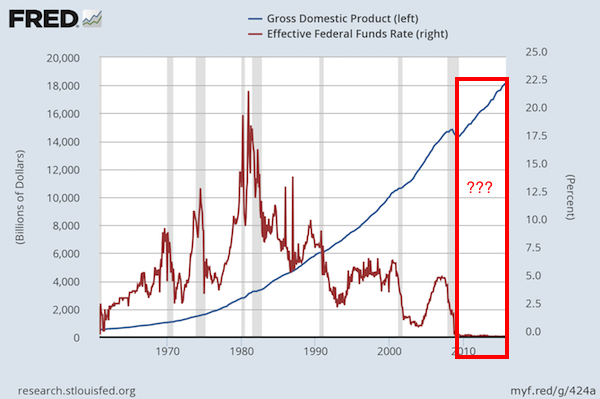 Indeed, even the CPI data suggest the Fed is deceptive. Core CPI is well above the Fed’s “target” rate of 2%. Even a child could look at this chart and see the breakout occurring. The Fed claims to be “data dependent” but all of the data has hit levels at which the Fed claimed it would raise rates again!

Let’s be blunt. The folks running the Fed are not idiots. They know the expansion is nowhere has nowhere near the strength that the official data claims. That’s why they’ve maintained rates at zero for so long.

However, while the expansion is weak, inflation is increasing dramatically. Which is the dreaded stagflation the US experienced in the 1970s.

The Fed is cornered. Inflation is back. And Gold and Gold-related investments will be exploding higher in the coming weeks.