The world has not yet full realized the magnitude of the slowdown in China.

Indeed, back in 2007, no less than current First Vice Premiere of China, Li Keqiang, admitted to the US ambassador to China that ALL Chinese data, outside of electricity consumption, railroad cargo, and bank lending is for “reference only.”

According to the State Council’s National Development and Reform Commission China’s electricity consumption grew at 3.2% in the 1Q16. This represents growth that is a full 50% LOWER than the “official” China headline GDP growth numbers.

According to Qiao Baoping, chairman of China Guodian Corp, China has overcapacity of 20%. Baoping believes China will see a DECREASE in electricity consumption this year. This comes after last year’s decline in electricity generation: the first such fall in DECADES.

THE CRISIS TRADER has produced an astounding 300% return on invested capital thus far in 2016.

Consider that Chinese freight index just collapsed to a record low. If China’s economy was chugging along at 6% or more… how is it that the volume of freight being shipped from China collapsed nearly 50% in the last two years?

The one prop holding up China’s economy is its rampant Credit Growth. Indeed, as ZeroHedge noted recently, China has pumped over $500 billion in credit into its economy thus far in 2016:

This represents an amount equal to nearly 7% of China’s GDP in credit expansion… in THREE MONTHS.

This insane money printing has generated no shortage of bubbles, the most notable of which is in property prices: 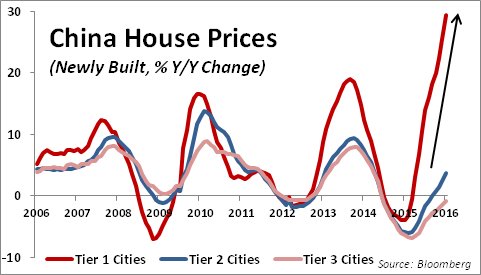 If this whole mess feels like 2007-2008 all over again, you’re right. Once again we have Oil and commodities spiking higher on hopes of China’s growth and Central Bank policy (more money printing). Meanwhile, the global economy is contracting, lead by a slowdown in China which is growing at 4% at best and likely flat-lining.

Remember, the farther and farther the markets get away from fundamentals, the worse the Crash will be.