Inflation is the Goal… and Central Banks Will Stop at Nothing to Get It!

The markets are prepping for the next massive round of QE.

As I noted earlier this week, NIRP has been entirely ineffective at generating Central Bankers’ desired “inflation.” The ECB has cut rates into NIRP four separate times only to find itself with 0% inflation. In contrast, the Bank of Japan has cut rates into zero once and immediately fallen back into a deflationary collapse.

Indeed, NIRP has even been a dud when it comes to pushing stocks higher.

The ECB’s four NIRP cuts have had a minimal impact on boosting EU stock prices:. The German DAX is roughly flat since the EU first began implementing NIRP. 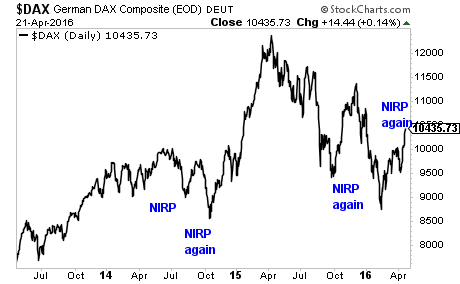 Indeed, the only significant rally in stocks that the EBC has been able to generate has come via QE. 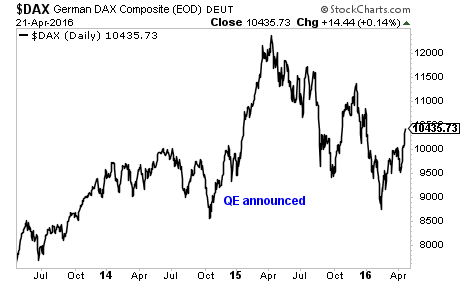 And the next round is just around the corner.

Both the ECB and Bank of Japan are facing a return to deflation. Japan’s inflation rate is flatlining after a brief boost courtesy of the largest QE program in history. The EU in contrast has seen QE briefly move it towards a deflation rate of 2%… all the more incentive to go for even more.

The goal is inflation. Central Banks will stop at nothing in their attempts to create it. The reason? Because the alternative is debt deflation which would implode the $100 trillion bond bubble.

Inflation is coming… you need to prepare now.

So tonight (Friday) at midnight, we are closing the doors on our offer to try Private Wealth Advisory for 30 days for just $0.98.