The “recovery” is over, at least as far as retail is concerned.

The retail ETF (XRT) has taken out its bull market trendline dating back to the 2009 bottom. 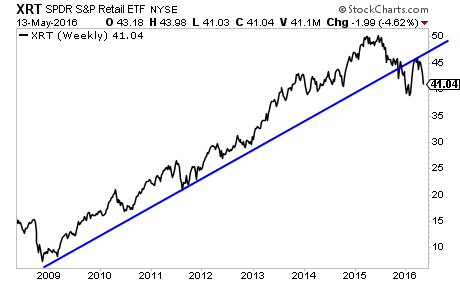 Even more than this, XRT has not only taken out its trendline, but it has since failed to reclaim former support. Instead we’ve had a dead cat bounce resulting in a “kiss” of former support, before rolling over again. 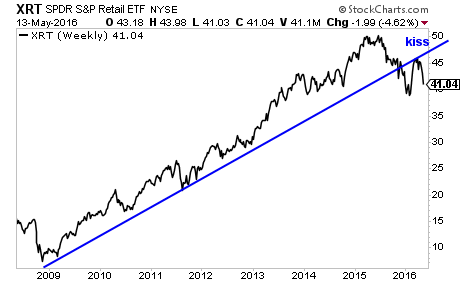 This indicates that what was support is now resistance. Momentum has broken completely and we’re now in a consolidation period at best and a downtrend at worst.

This comes at a time when large retailers like Kohl’s, Nordstrom and Macy’s are recording same-store-sales collapses ranging from 3.9% to 8.2%. Wal-Mart, the single largest retailer in the world, just recorded its first ever year over year sales drop.

The “recovery” is over. The US economy is heading into, if not already IN a recession. And stocks are poised for a Crash that will be at least on par with what hit in 2008.