Is the Derivatives Markets About to Implode the System Again?

The 2008 Crash was caused by the unregulated derivatives markets. And if you think that problem has been fixed, you’re mistaken.

DB sits atop the largest derivatives book in the world.

This one bank has over $75 trillion in derivatives on its balance sheet. This is over 20 times German GDP and roughly the same size as global GDP.

At this size, if even 0.01% of these derivatives are “at risk,” you’ve wiped ALL of the banks’ capital.

The bank’s CEO was “very disappointed” when Moody’s recently downgraded its credit rating.

Personally, we’d be a lot more disappointed by the share price.

DB shares have gone effectively NOWHERE for nearly 20 years. Moreover, this might be the single largest Head and Shoulders topping pattern ever. As we write this, we’re right on the neckline. 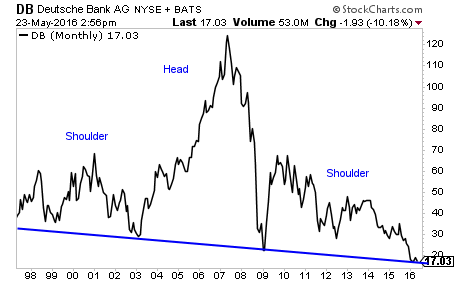 DB is perhaps the best example of the derivatives problem, but it is by no means the only one. US banks alone have over $200 trillion in derivatives sitting on their balance sheets.

And over 77% of these derivatives are based on interest rates.

This comes to roughly $156 trillion in interest rate-based derivatives… sitting on the TBTF balance sheets.

Suffice to say, the Fed cannot afford a spike in interest rates without imploding the big banks: the very banks it has funneled TRILLIONS of dollars to in an effort to prop up.

At some point this whole mess will come crashing down just as it did in 2008. The derivatives market remains a $600 TRILLION Ticking Time Bomb.