The Era of Centralization is Ending…

The most critical element of the BREXIT is that it is THE closing bell being rung on the period of Centralization from 2009 to today.

What do I meant by Centralization? I am referring to the era of Central Planning of the global economy by Central Banks.

In the US, we’ve seen the Federal Government/ Federal Reserve become involved in virtually every major industry in the economy including insurance, healthcare, housing/mortgages, banking, financial services, and even energy.

The US is not unique in this regard. Japan and the EU have also been in a period of Centralization, with their respective Central Banks becoming increasingly involved in their respective economies.

The BREXIT has ended this.

THE CRISIS TRADER has produced an astounding 37% return on invested capital thus far in 2016.

We have a success rate of 70% meaning we make money on SEVEN seven out of TEN trades. And thanks to careful risk management we’ve already produced a return on invested capital of over 240% thus far in 2016.

For certain, things were already becoming fractured due to Central Banks’ reliance on competitive devaluation.

In a world of fiat, all major currencies are priced against a basket of their peers. So when one Central Bank engages in a particular policy with the intent of devaluing its currency, that same policy inevitably puts upwards pressure on other currencies.

From 2008-2013, there was a degree of coordination between Central Bank. The best example would be when the Fed launched QE 3 in 2012, coordinating this policy with the ECB’s OMT program. At that time, the economic data in the US was in fact improving and the Fed should have been tightening. QE 3 was as much a gift to the EU as anything.

However, starting with the Bank of Japan’s massive QE program in 2013, everything changed. At that point, Central Banks began employing more extreme policies… policies that put tremendous pressure on other currencies… policies like QE programs in excess of $1 trillion… or NIRP.

At this point, Centralization began to come apart as Central Banks were now outright damaging each other’s efforts to devalue their currencies. However, it wasn’t until BREXIT that we received a REAL nail in the coffin for Centralization.

In the world of Central Planning, politics, not economics, drives policy.

Any sensible economist would have realized QE and ZIRP couldn’t generate GDP growth around 2011. However, in the world of Central Planning, the political implications of admitting this (relinquishing control of the financial system and permitting debt defaults/ restructuring to begin) is akin to political suicide.

Put another way, if Janet Yellen or Mario Draghi were to stage a press conference to state “my life’s work is incorrect, I have no idea how to generate growth, it is time for market forces to take hold and price discovery to occur” not only they but EVERY other Central Banking economist/ academic would soon be unemployed.

For this reason, the end of Centralizaton was only going to come through one of two ways:

Indeed, we believe that by the time the smoke clears on the next Crisis, the S&P 500 will have fallen to new lows. 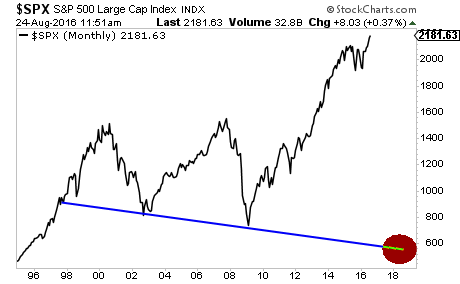 The Tech bubble was a stock bubble: a bubble focused on stocks as an asset class.

The Housing bubble was a real estate bubble: a bubble focused on houses, and even larger, more significant asset class.

This current bubble is the BOND bubble: a bubble in the senior most asset class in the financial system

We firmly believe the markets are preparing to enter another Crisis. With over 30% of global bonds posting negative yields, the financial system is a powder keg ready to blow.

If you’re looking for investment strategies to profit from this, I can help you…

Because I am usually warning about risks in the market, everyone assumes I’m nothing but a bear who has his clients shorting the heck out of the market all the time.

Pointing out the risks to the stock market is very different from actively shorting it. The editorial I publish here is focused on alerting EVERYONE about the problems the financial system faces.

As a result of this, we’re now at 98 STRAIGHT WINNING TRADES.

98 straight winners… and not one closed loser… in 20 months.

We take a careful and calculated approach to investing… which is how we’ve been able to maintain this incredible streak of winners… despite market conditions that can be described as “challenging” at best.

You can join us today by taking out a 30 day trial subscription to Private Wealth Advisory for just $0.98.

If you find Private Wealth Advisory is not what you’re looking for just drop us a line and you won’t be charged another cent.