The Election Year Fix is In… But Can Janet Make It To November?

The election year fix is in… and Janet Yellen is praying the markets hold together until November.

President Obama met privately with Yellen in April of this year. It was their first private meeting together since November 2014 (the Congressional election in which the GOP took both houses of Congress).

President Barack Obama met with Federal Reserve Chair Janet Yellen on Monday to discuss the U.S. economy amid signs that growth may be slowing as consumers retreat from spending.

Ahead of the afternoon meeting, White House Press Secretary Josh Earnest described Obama as “pleased” with Yellen, who he appointed to lead the Fed in 2014. It is the first time since November 2014 that the Fed chair has met with the president on her own. The meeting was closed to the news media.

The timing of these meetings is not coincidental. And if you think Obama and Yellen were discussing “signs that growth may be slowing” a mere 8 months before the former left office, I’ve got a bridge to sell you. The economy has been weak for EIGHT years. This is not a new issue.

The fact of the matter is Obama most likely gave Yellen her marching orders: hold the markets up until November.

THE CRISIS TRADER has produced an astounding 37% return on invested capital thus far in 2016.

We have a success rate of 70% meaning we make money on SEVEN seven out of TEN trades. And thanks to careful risk management we’ve already produced a return on invested capital of over 240% thus far in 2016.

Since that time, I and others have noted that a mysterious “someone” steps in and PANIC buys stocks anytime they begin to break down. The manipulation has been so obvious that a child could see it.

This has propped the markets up. But because NO ONE believes this current rally, the market fails to break higher because there is no real buying power.

As a result of this, the markets have essentially flatlined, staging nearly 39 days of flat price action. You have to go back to the ‘60s to find a more boring period for stocks. 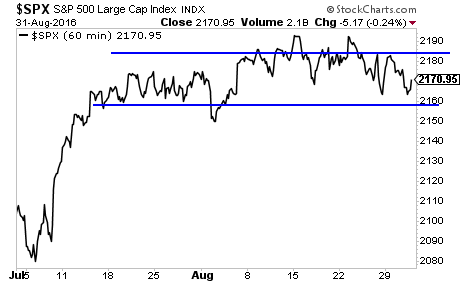 Again, the election year fix is in. Janet Yellen got her marching orders from the White House. And she will be doing everything possible to hold the markets up going into November.

You’ll no doubt remember, 2007 was NOT a time in which debt was irrelevant. And over the next 12 months, the markets staged the worst crash in 80 years.

If you’re looking for investment strategies to profit from this, I can help you…

Because I am usually warning about risks in the market, everyone assumes I’m nothing but a bear who has his clients shorting the heck out of the market all the time.

Pointing out the risks to the stock market is very different from actively shorting it. The editorial I publish here is focused on alerting EVERYONE about the problems the financial system faces.

As a result of this, we’re now at 107 STRAIGHT WINNING TRADES.

107 straight winners… and not one closed loser… in 20 months.

We take a careful and calculated approach to investing… which is how we’ve been able to maintain this incredible streak of winners… despite market conditions that can be described as “challenging” at best.

You can join us today by taking out a 30 day trial subscription to Private Wealth Advisory for just $0.98.

If you find Private Wealth Advisory is not what you’re looking for just drop us a line and you won’t be charged another cent.