Are These Billionaire Bets Ringing Bells at the Top?

The billionaires are coming out of the woodwork.

Carl Icahn paid his way through Princeton playing poker. The man understands risks and has accrued one of the largest fortunes in history playing the markets. Regardless of whether or not you think he’s a shark when it comes to activism, he usually wins and wins big.

Icahn is more bearish now than at any point in his life. He has 149% NET short the market.

Then there is George Soros.

Soros is famous for breaking the Bank of England and banking $1 billion in profits in a single day. However, that is just one trade in a career than spans nearly half a century of making massive returns from the markets. Like Icahn, you may not like Soros as a person, but you cannot deny his ability to play the markets.

Soros recently came out of retirement to place several massive trades betting on a market collapse.

Then there is Stanley Druckenmiller.

Druckenmiller is arguably the greatest money manager alive today. From 1986 onward he maintained average annual returns of 30%. He rarely if ever has had a single down year.

Druckenmiller recently issued a blank statement to investors to get out of the markets.

And finally there is Warren Buffett.

Buffett is the most famous stock market bull of all time. Routinely he is first or second in terms of wealthiest person in the world. And his fortune was built through the financial markets.

Commentators like to point out that Buffett’s largest positions are in Wells Fargo ($23 billion) and Kraft Heinz ($28 billion), but they are wrong.

Buffett has $73 BILLION IN CASH.

This is Buffett’s largest cash position ever. This position has increased from $33 billion in 2008 and has growth virtually every year in the last eight years.

Do you think Buffett is sitting on a record cash position because he’s bullish on stocks right now? His business partner Charlie Munger has admitted that he hasn’t bought a single stock in his personal portfolio in years.

Regardless of how you feel about the economy, Central Banks, or investing in general, the above people are some of the greatest managers of capital in history.

ALL of them are showing signs of being ultra-BEARISH.

And this is happening at a time when stocks hit new all-time highs. 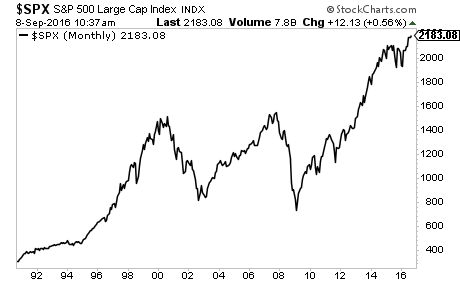 You’ve been warned. They say you don’t ring bells at the top, but these billionaires sure seem to be doing so.

If you, like Icahn, Buffett, Soros, and Druckenmiller are worried about a potential stock market meltdown, you’ll love our daily market analysis at www.gainspainscapital.com