So much for the narrative.

A big hat tip goes to John Williams who actually DID read the report and found that the Census has adjusted its methodology to include what interest income WOULD be if rates were not at zero.

In this manner, the Census was able to claim interest income INCREASED 111% during a period in which the US interest rate was 0.25%.

By the way, the White House controls the Census. It must be complete coincidence that during an election year suddenly the data got so much better based on fantastical assumptions.

Regardless, the report is just the latest in politically driven economic propaganda. This includes the jobs data.

We are lead to believe that jobs are strong and that the US is “fully employed.” Setting aside the fact that 94 million people are out of the workforce, and 46 million are on food stamps, let’s focus on the notion of “jobs.”

When someone gets a “job” that person begins to pay “income tax.” The Government loves this because it funds revenues. Which is why it’s rather off that if employment is indeed rising, income taxes being withheld have FALLEN for the last two years. 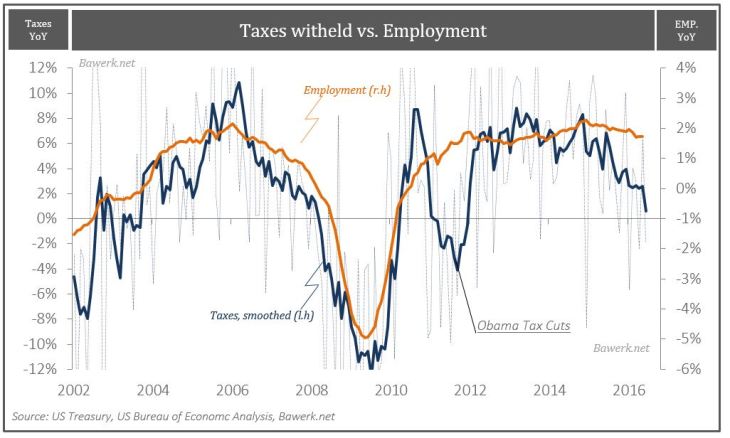 The data continues to fall apart here as well. The Rockefeller Institute of Government just released a report showing that state personal income tax revenues are rolling over aggressively.

State personal income tax revenues grew only 1.8% year over year in the first quarter of 2016. The second quarter’s preliminary data shows a decline of 3.3%.

If jobs are being created and personal incomes are growing, income taxes should be RISING. They’re not. This suggests that REAL economic growth is in fact MUCH lower than the mainstream financial media narrative.

Stocks have yet to adjust to this. Stocks believe the hype that the economy is growing rapidly and that we are in a recovery. When stocks finally adjust, we’re in for a rude awakening.

Indeed, we believe the global markets are on the verge of another Crisis, triggered by a crisis of faith in Central Banks.

2008 was Round 1 triggered by Wall Street banks. This next round, Round 2, will be even worse as faith in Central Banks collapses.