Unless the markets can take out its September highs, we could very well see a repeated of the 1987 Crash.

Murray Gunn is head of technical analysis for HSBC. In a recent client note, he pointed out the Head and Shoulders top pattern that presaged the 1987 Crash.

In its simplest forms, the Dow Jones Industrial Average formed a Head and Shoulders top when it violated its neckline. We then had a failed attempt to reclaim the neckline, which resulted in the Crash. 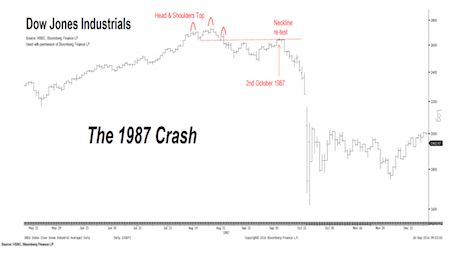 Gunn notes that the Dow is forming a similar pattern today. He also notes that momentum is waning, and Elliot Wave analysis indicates a 1987-Crash could indeed occur. 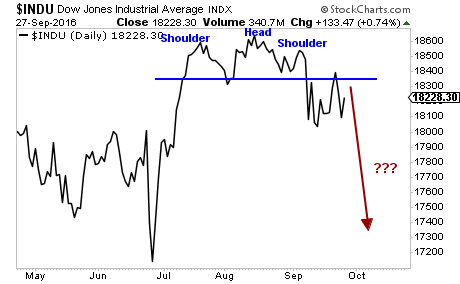 A big move is coming to the markets. And we’re already preparing for it.

112 straight winners… and not one closed loser… in 22 months.

Subscribers are pouring into this newsletter, to get these kinds of gains.

So tonight (Wednesday) at midnight, we are closing the doors on our offer to try Private Wealth Advisory for 30 days for just $0.98.

This is it… last call… NO MORE EXTENSIONS!