We’re Issuing a Formal Alert: Something Major is Coming in the Markets

Time for a reality check.

The market has had nothing but positives for three months now. BREXIT was contained. The Fed failed to raise rates again. The Bank of Japan and European Central Bank are printing a combined ~$180 billion per month (a record pace) and using it to prop the markets up.

And stocks are DOWN. While the bulls and CNBC shills talk about the markets like they’re in some incredible rally, the fact is that the S&P 500 peaked in mid-August. And if you want to go back further it’s gone absolutely NOWHERE since July 9th. 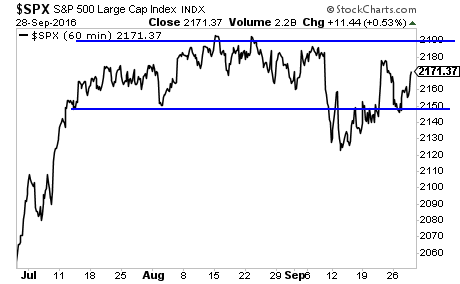 Seriously, if you cannot manufacture a roaring rally with follow through on the last three months’ worth of news, you’re not going to manufacture one ever.

Indeed, Central Banks have never been more aggressive in their easing.

And the bulls can’t get it done. So… what do you think is coming next?

First of all, I’ve lead subscribers to close 112 STRAIGHT WINNING TRADES. This is a record in investing, even greater than our 74 trade winning streak back in 2012.

And the last time we closed a LOSER was in NOVEMBER 2014.

So… you’re talking about closing nothing but winners for nearly TWO YEARS STRAIGHT, SETTING A RECORD FOR LONGEST WINNING STREAK.

To take out a 30 day trial subscription to Private Wealth Advisory for just 98 cents.