Deutsche Bank is the 11th largest bank in the world. It has assets of $1.8 trillion and over ~$60 trillion in derivatives on its books.

From a balance sheet perspective, DB’s balance sheet is 50% the size of Germany’s GDP. By way of comparison, imagine if JP Morgan was a $9 TRILLION bank. That’s effectively DB’s status in Germany.

What are the differences?

Europe is where Negative Interest Rate Policy (NIRP) Brexit and exposure to a banking system that is entirely too laden with debt has proven a disastrous cocktail.

What precisely has hit DB remains to be seen. But something happened in the first two weeks of September that triggered a market meltdown. DB shares have fallen straight down a total of 27% since that time. 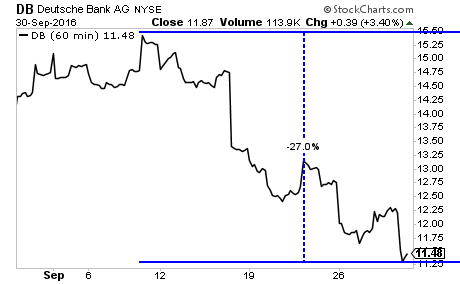 Now we are in full-blown panic mode. This bank is too big to bailout and too big to bail-in. Moreover that massive derivatives book connects DB to over 200 financial entities. Unwinding it will be catastrophic.

This could very well lead to a 2008 type Crash. To be blunt, I don’t see how Germany or the ECB can contain it.

First of all, I’ve lead subscribers to close 112 STRAIGHT WINNING TRADES. This is a record in investing, even greater than our 74 trade winning streak back in 2012.

And the last time we closed a LOSER was in NOVEMBER 2014.

So… you’re talking about closing nothing but winners for nearly TWO YEARS STRAIGHT, SETTING A RECORD FOR LONGEST WINNING STREAK.

To take out a 30 day trial subscription to Private Wealth Advisory for just 98 cents.