What Happens When the Fake Stock Market Driven By Fake Data Finally Adjusts to Economic Realities?

While we’re on the topic of fake news… how about we assess the fake economy of the last eight years?

President Obama at one point claimed that those who questioned the strength of the recovery were “peddling fiction.”

It’s an interesting claim given the entire recovery, at least post 2010, has been built on fake economic data to perpetuate a fake narrative of growth.

There is no way on earth that the real unemployment rate is less than 5%. Over 45 million people are on food stamps and over 94 million people are out of the work force. Claiming unemployment is at 5% in the context of these two other data points is like claiming you’re in incredible shape provided you don’t count body fat or cardiovascular health.

The US has yet to achieve a single year of 3% GDP growth in the last eight years. Unfortunately even these weak growth numbers were fake. The US’s economic reality stripped of accounting gimmicks is in fact much worse.

The most obvious gimmick is that of using a low deflator measure for inflation.

Let me give you an example. According to the latest GDP numbers, the latest GDP deflator was 1.11%. This means that inflation was supposedly only 1.11% during the last quarter.

At the same time, the official inflation measure for inflation, the CPI, is 2.4%.

Put another way, inflation is supposedly at 2.4% until it comes time to calculate GDP growth at which time it magically falls to 1.11% so that GDP growth looks larger than it really is.

What’s truly astounding is that the “recovery” has been this weak despite the US spending a truly staggering amount of money.

During a period in which tax revenues have risen every year since 2009 with record tax revenues hitting in 2013, 2014, 2015 and soon to be 2016, the US Government has still managed to outspend this amount to the tune of $8.1 TRILLION.

Put another way, despite the US Government raking in RECORD amounts of tax revenues in the last four years, it still managed to spend to grow the debt by $2.5 trillion. And if you go back to 2009, the debt has grown $8 trillion.

And what has the US got to show for it?

Let’s be clear here. We’ve spend a staggering amount of money, increasing the US’s Debt to GDP ratio from 77% to 105%, and yet we’ve had the weakest recovery in US economic history.

What’s truly amazing is that the fake news continues to trot out fake gurus and experts to shill the fake narrative of “recovery” and then is shocked when trust in the media hit record lows.

So what happens to the fake stock market when it finally adjusts the economic realities? 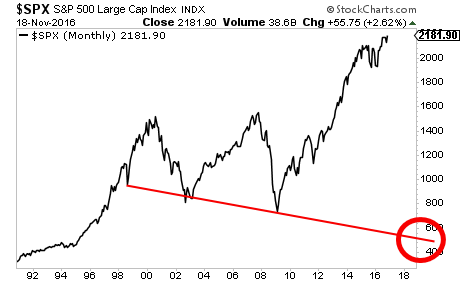 As we write this, there are less than 70 left.