Is Japan About to Implode the $10T $USD Carry Trade?

It is said that history has a sense of irony. The latest US election is not an exception.

This is not conspiracy theory. Since Trump won the Presidency, Japan has absolutely SHREDDED the Yen relative to the $USD. In a mere three weeks, the Yen/ $USD pair has collapsed an astounding 12%. 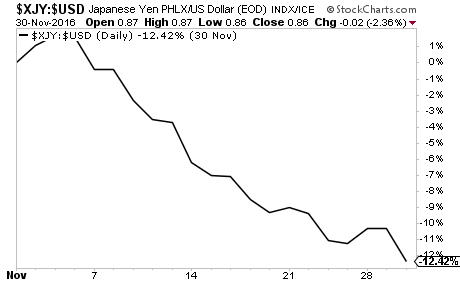 That doesn’t sound like a huge deal, so look at the longer-term chart. 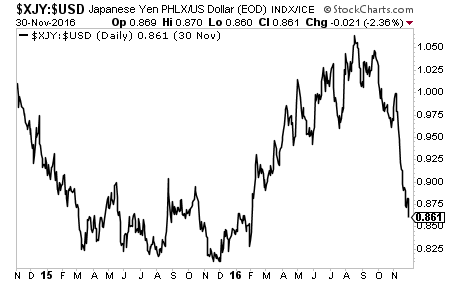 That is a massive currency crash. The Bank of Japan has accomplished in three weeks what previously took six months and a $100 BILLION+ expansion of a massive QE program. 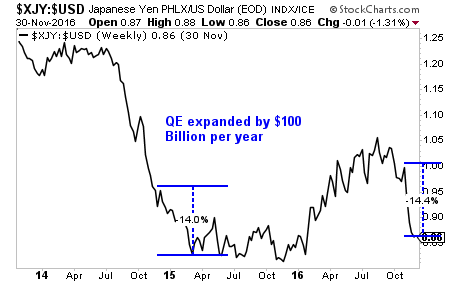 The real problem with this is that it is forcing the $USD sharply higher, triggering a potential crisis the debt markets as the $10 TRILLION US Dollar carry trade ignites.

If you’re unfamiliar with the concept of a carry trade, it occurs when you borrow in one currency, usually at a very low interest rate, and then invest the money in another security, whether it be a bond, stock or what have you, that is denominated in another currency.

Globally over $10 TRILLION of $USD is doing this right now. $10 Trillion: an amount greater than the economies of Japan and German combined.

Every tick higher in the $USD… means more of this trade blowing up. Already, it’s leading credit stress in Asia. 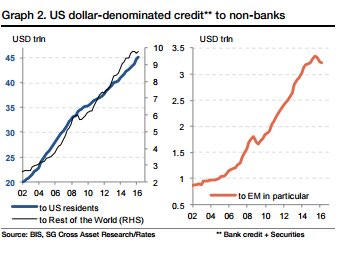 As we write this, there are less than 80 left.