The Next Market Move is Going to Annihilate Consensus Thinkers… Buckle Up.

Here’s a chart your broker won’t show you. 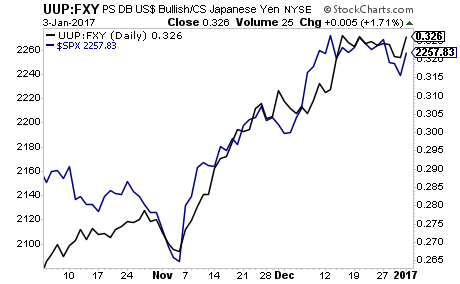 The entire move in the S&P 500 since the November 8 election has been driven by the move in the $USD/Yen pair. As you can see, these two items (USD/YEN and S&P 500) are essentially the same trade.

In investing, if you’re right even 51% of the time, you’re considered a GENIUS.

Well, our options trading service THE CRISIS TRADER  has a success rate of 75%…meaning we make money on THREE out of FOUR trades.

Most traders make enough of a SINGLE trade to subscribe for a whole year… But if you decide it’s not for you, just drop us an email in the first 30 days and we’ll issue a full refund.

Seriously, what are you waiting for?

Everyone should care, because this trend is ending.

The USD/Yen currency pair is now at MASSIVE resistance. The odds of this trend continuing are now less than 20%. 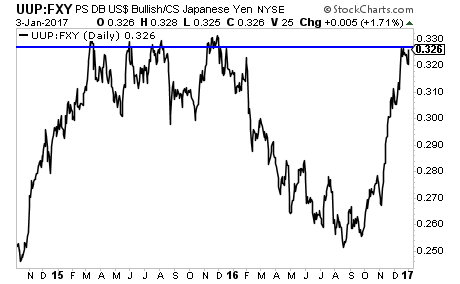 Which means… this move will be reversing, and stocks will be dropping, HARD.

The last time this trend reversed was the early 2016 bloodbath during which stocks dropped 13% in the span of eight weeks. 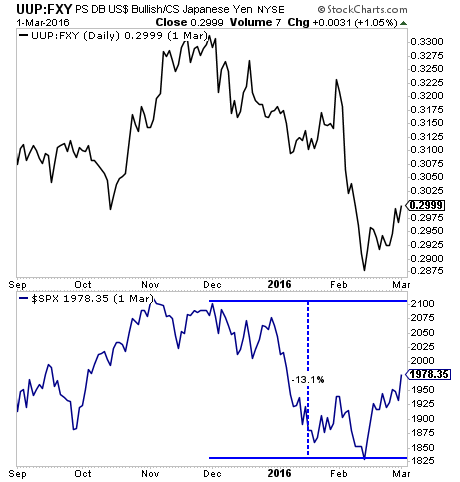 Don’t say I didn’t warn you when another drop like this hits before the end of the month.

If you are looking for investment ideas that will CONVERT to REAL profits, you NEED to take out a trial subscription to our weekly investment advisory, Private Wealth Advisory.

1)   Between November 2014 and November 2016, this newsletter locked in 109 WINNING CONSECUTIVE TRADES. This is an all-time record for the newsletter industry.

3)   Even including losses running back FOUR years, our success rate on investments is 86%, meaning we make money on more than 8 out of 10 investments.

If you don’t believe me, consider what some of our clients are saying:

You guys have given me the best returns during my run with you guys, over 30 percent!

You guys are something else. I read a lot of research and you’re head and shoulders above the rest.

But I’m so confident in this newsletter’s ability to show you returns that I’m willing to let you try it for a FULL MONTH for just $0.98.

Yes, 30 days, for less than a single Dollar.

If at any point during the first 30 days, you decide Private Wealth Advisory is not for you, simply send us an email and you won’t be charged another penny.

I know you’ll stay with us. Just as Roger, William, and thousands of other investors are doing… and they’re outperforming the market by double digits as a result.