Before starting this article, I want to stress the following:

However, in today’s highly politicized world, you cannot ignore some moves.

On that note, on Tuesday night, President-Elect Donald Trump stated in an interview with the WSJ that the “USD was too strong.”

Less than 24 hours later, Fed Chair Janet Yellen, openly defied Trump, talking up the $USD and claiming the Fed was worried about inflation and needed to hike interest rates.

For 8 years the Fed has engaged in some of the most profligate monetary policy in history. The Fed has expanded its balance sheet by $4 trillion, employed ZIRP for seven years, and openly talked down the $USD anytime it broke above 98.

Then, suddenly, after the November 8th Presidential election, the $USD spiked to above 100 and the Fed didn’t say a word. 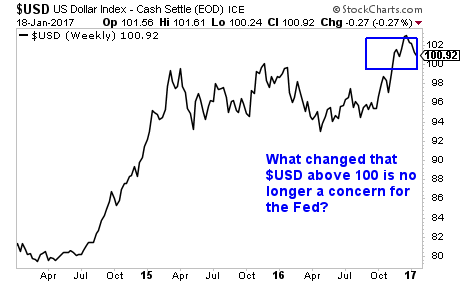 More than that… the Fed has repeatedly stated that it wants to hike rates THREE times in 2017.

THREE rate hikes in a single year… after the Fed has only raise rates TWICE in the last TEN.

Let’s be clear… the Fed is now an actively political organization. We knew the Yellen Fed was a left-leaning group, but this is truly incredible from an organization that claims to be neutral and independent.