The biggest trade in the world is staring everyone in the face.

According to a Bank of America/ Merrill Lynch fund manager survey, the US Dollar is the single most crowded trade on the planet. 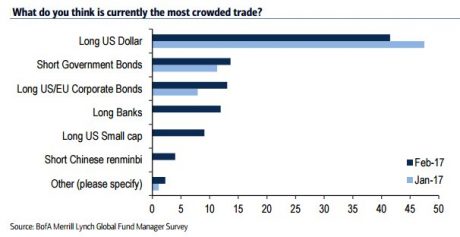 In a fiat world, the value of a given currency is based on where it trades relative to other currencies. In the case of the $USD, the Euro comprises 56% of the basket of currencies against which the $USD is valued.

Put another way, whatever happens to the Euro will trigger an inverse reaction in the $USD.

I mention this because the Euro is about to explode higher to 120 as the ECB ends its QE program and begins talking about hiking rates.

I realize this sounds completely insane… but take a look at the data:

Inflation in the EU is erupting higher. German inflation topped 2% for the first time since 2012.

The rise in German inflation, to 2.2 per cent in February, took annual price rises above the ECB’s target rate for the eurozone of close to but under 2 per cent. It came as Jens Weidmann, the president of Germany’s Bundesbank, said the ECB would have to raise its eurozone inflation forecast this month on the back of rising oil prices and a strengthening economy.

This is spreading across Europe.

Euro zone inflation is likely to be sharply higher in 2017 than projected but will still dip towards the end of the year, Bundesbank president Jens Weidmann said on Wednesday, arguing that accommodative monetary policy remains appropriate.

With inflation surging on higher oil prices, and criticism of the European Central Bank (ECB) mounting in Germany ahead of September’s elections, pressure has increased on the ECB to at least start a discussion about when and how it would scale back its extraordinary stimulus measures.

With inflation surging, there is NO reason for the ECB to be engaged in a massive €60 billion per month QE program. The ECB will be forced to taper this program if not end it entirely in the very near future.

This will ignite the Euro to 120 if not higher. The EU currency is beyond oversold. Even Germany has admitted that it is too low.

The markets are already smelling this, despite all the hoopla about the $USD being THE asset class to own, the Euro is actually outperforming the $USD thus far in 2017 (albeit marginally). 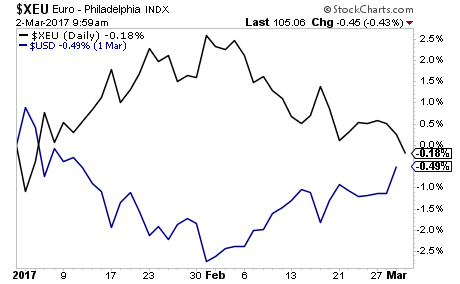 Massive tectonic changes in the market are rarely perceived in advance. But given the above factors (excessive popularity of the $USD, inflation in the EU, talk of tapering QE by the ECB) we have the makings of a “rip your face off” rally in the Euro.