It’s 1937 All Over Again: Weak GDP, Soaring Inflation, and the Fed Hiking

The US economy continues to implode as inflation ignites.

GDP Now has collapsed from 3.4% in early February to 1.3% today. It will be revised even lower based on the awful deficit numbers (the US trade deficit hit a five year high in January).

Roughly all four are now at or above the Fed’s so-called “target” of 2%.

The Fed is going to repeat its 1937 mistake of hiking rates into a weak economy. Now, like then. CPI is soaring while GDP growth flatlined. 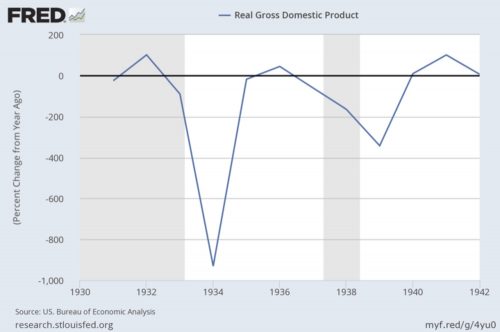 The Fed aggressively hiked into this mess. The outcome?

The US plunged into recession and stocks nearly halved.

This concludes this article, if you’re looking for more investment insights we offer three Special Reports (35 pages of premium content) outlining a variety of investment strategies you can use to generate real wealth the markets.