The Fed meets this week on Tuesday and Wednesday.

The market believes that there is an 86% chance the Fed will be hiking rates during this meeting. The Fed has been broadcasting this for a month straight. It is possibly THE most expected rate hike in years. The consensus is that we will see a 0.25% rate hike bringing the Federal Funds Target rate to 0.75%-1.00%.

No one makes money by trading the most expected thing. With that in mind, what the Fed does or doesn’t do is largely irrelevant as far as I’m concerned.

The far more important development for the markets comes from the ECB,which revealed that it discussed a “rate hike” before the end of QE during its meeting last week.

Bear in mind, this is the ECB… which has cut rates into NEGATIVE four times; the same Central Bank that is currently engaged in a €60 billion per month QE program.

And it is talking about RAISING RATES.

THIS is something few in the markets are anticipating. And it has set the stage for a RAGING Euro rally (and $USD Collapse).

The Euro comprises 56% of the basket of currencies against which the $USD trades. So if the Euro begins to rally based on the ECB tightening, the $USD will drop hard. You can see the two currencies “mirroring” one another in the chart below. You can also see the Euro bottoming out and preparing to rally hard. 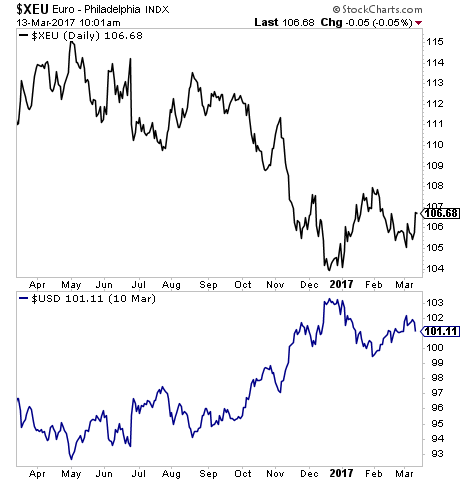 THIS is the big issue for the markets this week: not a completely expected Fed rate hike, but a completely UNEXPECTED potential rate hike from the ECB.

The market is not ready for this. And it’s going to cause an “event” for many asset classes.

If you’re looking for active real time “buy” and “sell” alerts to help you make money from the markets I strongly urge you to take out a 98 cent trial to my Private Wealth Advisory newsletter.

Private Wealth Advisory is a weekly investment advisory that tells investors what stocks and ETFs to buy and sell… and when to do so.

Just yesterday we closed out two more winners of 8% and 9%.

Best of all, you can explore Private Wealth Advisory  for 30 days for just $0.98.