To the People Losing Their Minds on Social Media… Want to See a REAL Problem?

This needs to be said. The following is not a Pro-Trump article; it is an article to gain some perspective.

The people losing their minds on social media over Trump as President are some of the most lost/spoiled people on the planet.

And they don’t even know it.

These people have obviously never faced a real problem in their lives, which is why they are so worked up about a non-issue.

Let me be clear… anything that you can address by sitting at home whining on your expensive computer on a social media platform is NOT a REAL problem. You are just playing a team sport like fantasy football.

Access to running water/ food… THOSE are real problems.

Right now, as I write this, there are children in developing countries who just arrived at school after starting a 5-HOUR journey at 3AM.

I am not writing that metaphorically. I personally know people who work with these children. Again… these are CHILDREN who wake up at 3AM, walk 5 hours to school because there isn’t another school closer…and then walk back home again.

Do you have a 10-hour commute?

Do you have to walk those 10 hours through mountains or jungle where there are people who could kill or rape you any day of the week?

There are well over 1 billion people in the world who have REAL problems and could use help. The people losing their minds on social media all have resources/ talent/ and energy to help solve these problems.

But they are not.

Instead they are ranting about how “awful” it is in the US.

Here’s something that could help you get over Trump’s Presidency… looking around at your house which has running water and your fridge which has food in it.

How about looking at your roof/ the walls of your house that stop the weather from washing your home away when it rains.

You want to see real problems? Look at what just happened in Peru a few weeks ago. Flash floods have literally destroyed some people’s entire lives.

Watch the below video of a woman emerging from a mudslide which dragged her for miles. 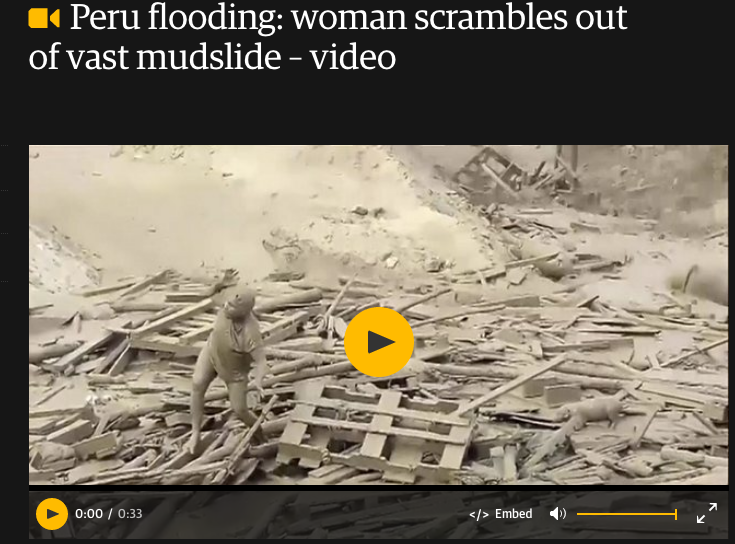 THAT is a real problem. Not the fact that your particular candidate didn’t win an election.

People all over the world need help. What are you doing to help them? Anything?