While everyone continues to focus on Trump and his policies, a much larger issue looms.

That issue is the US debt ceiling.

The US Government hit its debt ceiling on March 16, 2017. The Government employed “extraordinary measures” to keep the Government open. At that time, Congress had a little over three weeks to deal with this issue.

Given how divided Congress has become, it’s no surprise this has gone nowhere. Congress left for its spring recess without fixing this.

Congress returns on April 21st and will have just a handful of sessions to resolve this issue before its deadline. (April 28 2017).

In order to resolve this issue, Congress will have to resolve the budget… which includes issues that are EXTREMELY contentious (the US/Mexico border wall for one).

Put simply… in order to avoid a Government shutdown and potential repeat of the 2013 Debt Ceiling Crisis, the same Congress that cannot even get an Obamacare Repeal off the ground (one of the most sought after pieces of legislation in over a decade)… is supposed to somehow work out a budget including VERY contentious issues… in a HANDFUL of sessions.

Good. Luck. With. That…… particularly at a time when it is clear certain groups in Congress are all too happy to blow up deals in order to sabotage the Trump administration’s agenda.

This is an absolute mess. And the market is only just beginning to wake up to the risk here with the S&P 500 breaking below critical support on Thursday. 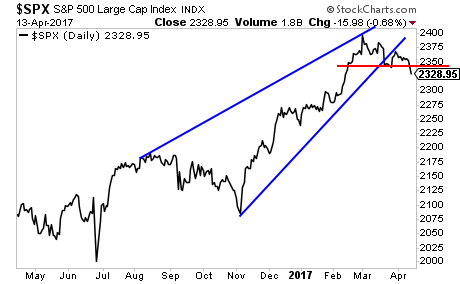 If you are concerned about a potential debt crisis in the US, you can take easy steps to prepare for it.

Indeed, you could even make money from it with the right investments.

On that note we are already preparing our clients for how to make money from this with tree simple investment strategies designed to pay out when the markets enter periods of heightened risk.

To learn them you can pick up a free Investment Report here: