That Trump’s economic proposals, particularly his tax reform plan, would not be hitting in 2017.

If you don’t believe us, here’s Trump’s Treasury Secretary confirming it.

Treasury Secretary Steven Mnuchin said in a published Monday with the Financial Times that enacting tax reform legislation by August is “highly aggressive to not realistic at this point.”

The comments contrast with remarks Mnuchin made in March, when he said his goal would be to have a tax bill “signed” by August…

The US is already saturated in debt… due to our financing a staggering amount of social entitlement spending which comprises 64% of the Federal Budget.

Even if Trump were to cut ALL non-entitlement and military spending programs by 20% across the board, he’d only free up $64 billion.

And by the way, the US is STILL running a deficit… indicating that much of this is being financed by money we don’t have.

Put simply: the math does not support any tax reform. The US is already spending more than it makes via taxes. The only way you can reform taxes or lower them is if the money comes from somewhere else.

This is a major warning to stock investors to be extra careful. Now more than ever is a time to be nimble and preparing to make money from a market “event.” 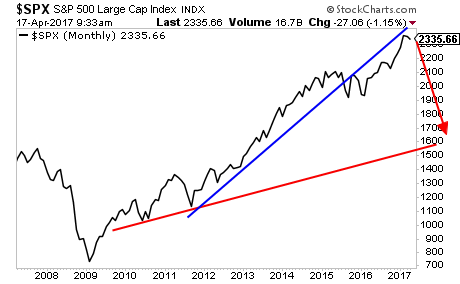 If you need help doing this, I strongly urge you to try out our weekly market advisory, Private Wealth Advisory.

Over the last two years, we’ve maintained a success rate of 85%, meaning we’ve made money on more than EIGHT out of every ten trades we make.

Today, if you’d like to join us, you better move fast…