A tsunami of inflation is rapidly moving through the financial system.

Most investors only pay attention to the Federal Reserve. And they are missing the BIG PICTURE for Central Bank monetary policy.

The Fed is tightening policy by hiking rates. But the rest of the world’s Central Banks are printing a combined $200 BILLION in QE every single month.

Yes, $200 billion. At a time when the financial system is out of crisis and the Fed’s put its own “print” button on “pause.”

This is an all-time record… greater even that the global money printing that occurred at the depth of the 2008 Crisis when Central banks were desperate to prop the system up.

Indeed, at $200 billion per month, we’re talking about an annualized pace of over $2 TRILLION in money printing every year.

If you don’t believe this will unleash inflation, consider that already in the US, inflation has exceeded the Fed’s targets on ALL FOUR of its measures.

Bear in mind, these are the “official” measures of inflation… the ones that don’t include things like food, or energy. When you account for the rise in the REAL cost of living in the US, REAL inflation in the US is closer to 6%.

And this is happening at a time when the Fed is hiking rates and NOT printing money.

If you don’t take my word for it, take a look at Gold priced in the $USD, Japanese Yen, Euro, and British Pound.  The precious metal has begun to break of to the upside in all major world currencies. 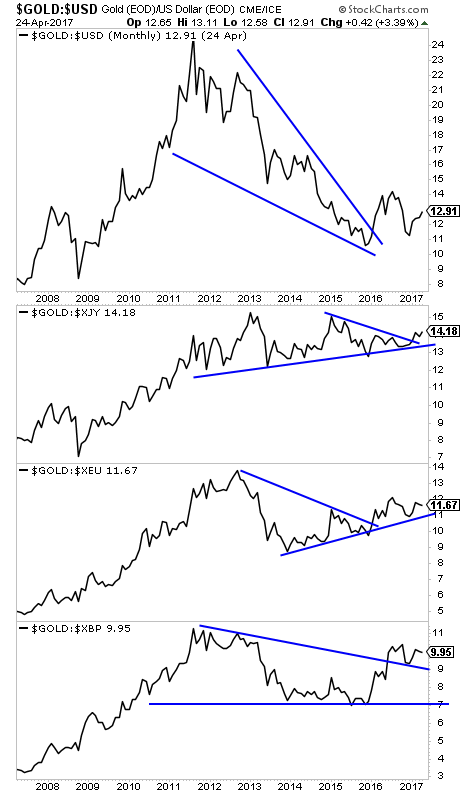 If you’re looking for a means to profit from this we’ve already alerted our Private Wealth Advisory subscribers to FIVE trades that will produce triple digit winners as inflation takes hold of the financial system.