The market is rising… or is it?

The number of individual S&P 500 companies above their 200-day moving averages (200-DMA) has rolled over.

Put simply, the broader market is NOT confirming this move in stocks. 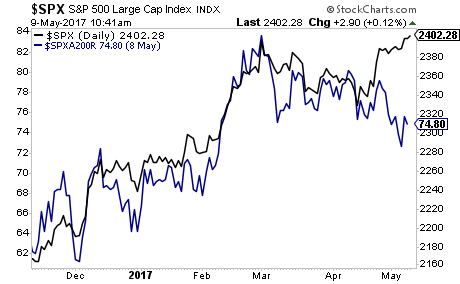 Because the market is being propped up by just a handful of Tech Companies.

Those companies are: Apple, Amazon, Microsoft, and Alphabet.

These are the single most popular companies on the planet, with every fund manager, and even the Swiss National Bank loading up on them

Remove these companies from the market, and the markets are DOWN.

Because the fundamentals for these companies are rolling over. And the investment crowd will soon be running to the exits.

Sales for Apple’s #1 product (the iPhone) began to decline a year ago.  They’ve declined in THREE of the last four quarters on a Year Over Year basis.

Throughout this same time period, the company’s stock price has risen an astounding 75%. 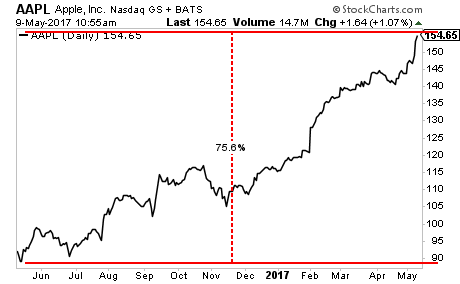 So… Apple’s stock has risen 75%… during a time in which its #1 product is selling less… and its trailing twelve-month revenues are below its 2015 results.

And this company, (and a handful of others like it), is holding the entire market up!

We are literally back to how the market was in late 2007… or early 2000 depending on how you look at it.

We all remember how those situations ended.